Realmeter's survey of 2,011 adults nationwide from Dec. 24-28 found that Lee and Hwang are the front-runners and within the margin of error among major liberal and conservative politicians who have been mentioned as candidates for the nation's next presidential election in 2022.

Lee, a liberal politician, was favored by 13.9 percent of the respondents, while Hwang, who served as acting president in 2017 in lieu of then-impeached President Park Geun-hye, was supported by 13.5 percent.

In a similar poll unveiled by the same pollster a month ago, Lee and Hwang were supported by 15.1 percent and 12.9 percent, respectively. 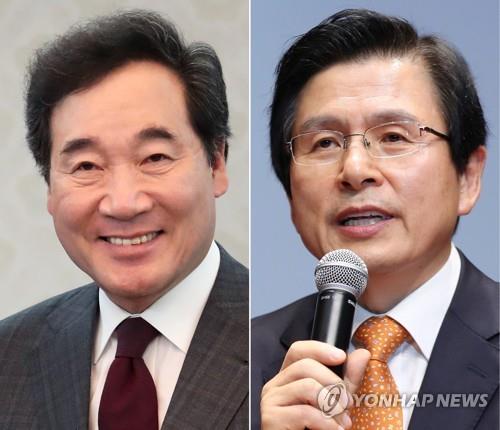 The survey conducted on a request from online news website OhmyNews has a margin of error of plus or minus 2.2 percentage points and a confidence level of 95 percent.

The gap of 0.4 percentage point between the incumbent and former prime ministers is within the margin of error. Neither Lee nor Hwang have publicly expressed presidential ambitions.

Lee was elected to the National Assembly four times and served as governor of South Jeolla Province before being tapped as the Moon Jae-in government's first prime minister in 2017.

Hwang, who served as the prime minister from 2015 to 2017 during Park's presidency, is reportedly being courted to join the conservative opposition Liberty Korea Party.

Meanwhile, Gyeonggi Province Gov. Lee Jae-myung jumped by one notch to third place in the Realmeter poll by garnering support from 9 percent of the respondents, up 2 percentage points from a month ago.