INCHEON, Jan. 3 (Yonhap) -- Kim and Gen, a young Canadian couple, flew a total of 17 hours from Canada's capital of Ottawa to Vancouver and then to Incheon, South Korea, on their winter vacation this week to visit Kim's Korean grandparents in Jeonju, well over 200 kilometers from Incheon International Airport.

Instead of heading straight to Jeonju after landing in Incheon Monday evening, they decided to check in at Incheon International Airport's capsule hotel for a 12-hour overnight stay before resuming their journey to the old Korean heritage city the next morning in a fresh condition.

"We just came from a flight, so we wanna rest before we go somewhere else tomorrow," the 27-year-old woman said after their check-in.

"We didn't wanna do Ottawa to Vancouver, Vancouver to Incheon and Incheon to Jeonju in one day," said the 26-year-old Kim, who first heard of the airport hotel from his parents. "They said it was the closest one once we got out of the airport."

"We didn't need a fancy hotel. We just wanted something easy and close," the couple said, citing convenience as the top reason they chose to stay at the capsule hotel Darakhyu.

The pair is one of more than 200,000 passengers who travel through the mega airport every day, which has grown into one of the world's busiest transportation hubs since its opening in 2001.

Under the concept of a capsule hotel, the first airport hotel Darakhyu was launched by the Korean luxury hotel operator Walkerhill in early 2017 in a quiet corner of Incheon International Airport's Transportation Center, which links the subway and train stations to the first passenger terminal. Economical and only a crosswalk away from the main terminal, the airport accommodation has fast become a convenient option for passengers landing late at night or departing early in the morning, as well as for those who transfer through Incheon.

The hotel opened as part of the airport operator's efforts to reduce the pains of long passenger standby times as the airport increased nighttime and early morning flight schedules.

An overnight stay at the capsule hotel is a very quiet and clean experience, albeit a very cramped one.

A brief check-in procedure at the simple two-person reception desk produces a card key to one of the hotel's 60 shipping container-like cells measuring 4.3 square meters at a minimum.

The standard 4.3-square-meter single room comes with a small single bed a little less than 1 meter in width and a spare space smaller than the bed, where a valise could barely fit in.

Payment of an additional 7,000 won gives you a slightly bigger room with a mini shower booth and a washstand, which doesn't have a free toothbrush or razor. Those can be picked up at the reception desk for a fee.

For all room types, toilets are not included. Public toilets and shower rooms are equipped only with very basic amenities but are cleaned and managed in five-star hotel condition, and they mostly remain quiet and empty even during the hotel's busiest hours. 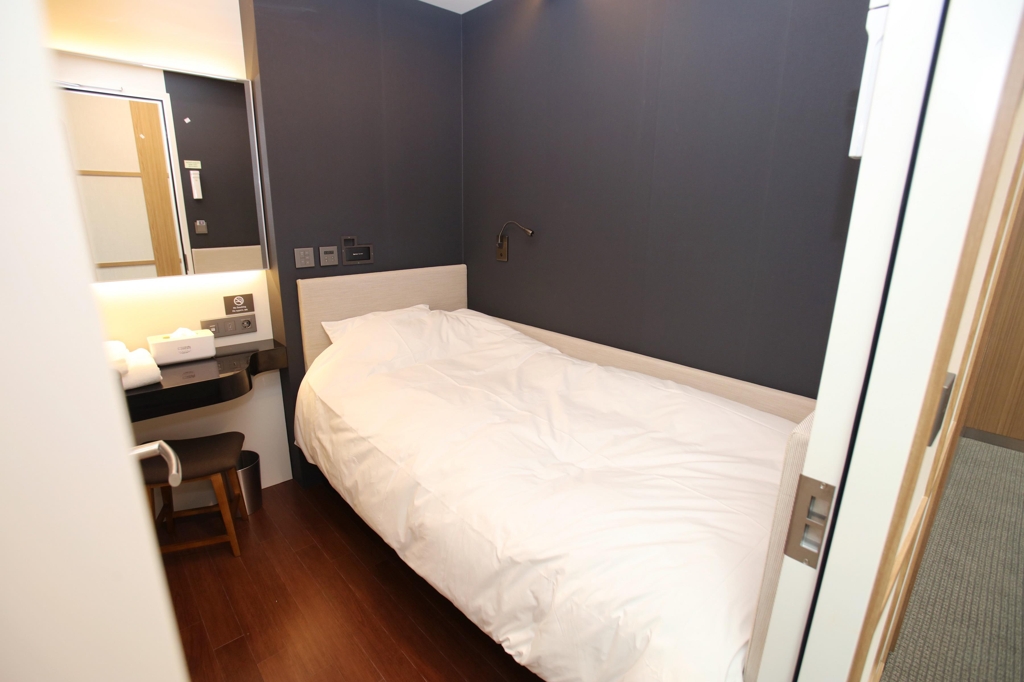 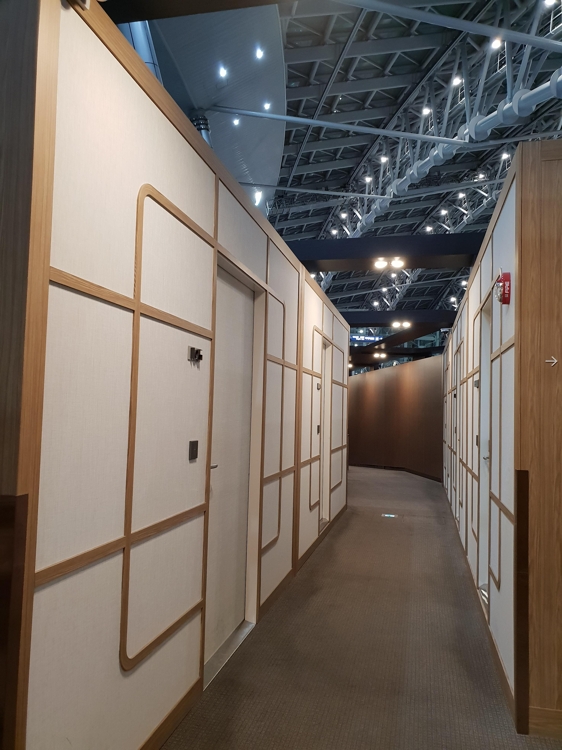 The services and amenities of the hotel are stripped down to a very minimal level to match the hotel's sole purpose of providing a few hours' rest or an overnight sleep, but the core task is served with maximum care.

The rooms' small beds come from American mattress maker Simmons' high-end "Beautyrest" line and are topped with clean, comfy bedding that has the crisp feeling of luxury hotel sheets.

Each room is soundproofed and air-conditioned individually. They are also fitted with a small Bluetooth Harman Kardon speaker and a reading light, breathing a little life into the narrow box.

The hotel's heritage-inspired design is also a breath of fresh air in the dry airport corridor. The traditional Korean house hanok's tranquil design of wooden window frames paned with white mulberry paper inspired the overall hotel exterior, while hanok's signature rafters that line the ceilings of each room set the tone.

The hotel's lobby is an open lounge separated from the public airport space by panels of wood bars. Two TV screens provide the latest updates on flight information, and three PCs and a printer serve as a 24-hour business center. Money exchange and baggage keeping are also services available for hotel users.

Reservations and payments can be made on the hotel's website as well as on-site at the reception desk, but the rooms are mostly sold out around three weeks in advance. Reservations are 100 percent refundable if they are canceled at least a day before check-in.

With an identical price table, the second Darakhyu hotel provides slightly more floor space for each room type and added a new feature using a mobile robot to guide the way to the hotel.

"It's a pretty big room for a capsule hotel," Kim said as he sized up the hotel at Terminal 1. "(Regardless of the price,) it's more for the convenience. As long as it wasn't too expensive, we were gonna stay here."