SEOUL, Jan. 2 (Yonhap) -- Citizens in Seoul and surrounding areas have enjoyed clear blue skies for the past 11 days without worrying about fine dust, but the air will again get thick with ultrafine particles beginning this weekend, a state think tank said Wednesday.

The National Institute of Environmental Research (NIER) under the Ministry of Environment said that levels of ultrafine dust will rise over Seoul and other parts of the Korean Peninsula from Saturday, when high atmospheric pressure will bring bands of fine dust here from Dalian, Manchuria and the Shandong Peninsula in China. 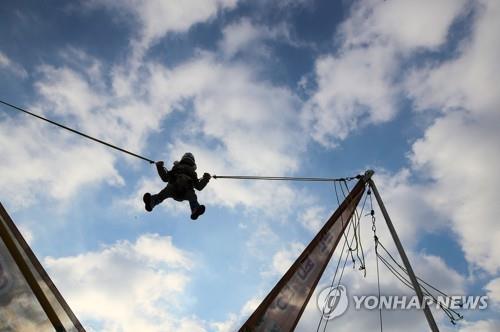 Between Dec. 23 and Jan. 2, the ultrafine dust concentration over the capital area stayed below 25 micrograms, with the figure dipping as low as 8 micrograms on Dec. 27.

The sky over the Seoul area is expected to continue to remain free from ultrafine dust until Friday, with cold northern winds blowing away such particles.

"The temperature and the fine dust concentration level are closely related. Fine dust levels have dropped in our country over the past weeks, as the cold winds blowing from the north to the Korean Peninsula are clean," an official at the NIER said.

In fact, the temperature in Seoul dived from 2.9 C on Dec. 22 to minus 3.4 C the following day. From Dec. 23 to Wednesday, the daily lows in the capital areas were around minus 10 C.

The official explained that the recent cold wave was caused by the southbound movement of cold continental high pressure north of Mongolia.