SEOUL, Jan. 2 (Yonhap) -- South Korean Foreign Minister Kang Kyung-wha on Wednesday emphasized the importance of pulling off a significant accomplishment this year in the nascent peace process on the peninsula.

"2019 should be the starting year for a full-fledged Korean Peninsula peace process," she said at a ceremony to mark the beginning of the ministry's work in the new year.

Kang pointed out the robust alliance with the United States will serve as the foundation for the drive that was set in motion last year.

She described 2018 as the year to warm up to open an era of peace and prosperity in Korea. 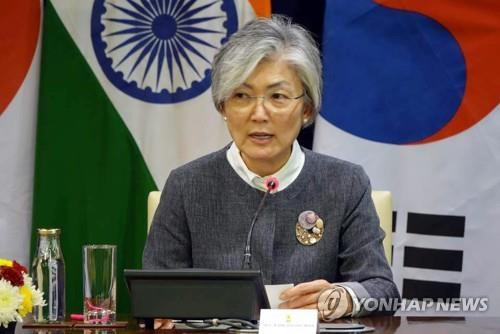 The leaders of the two Koreas had three rounds of summit talks during the year, in which they agreed on a set of measures to reduce border tensions and move toward denuclearization.

Pyongyang and Washington also had their unprecedented summit in Singapore, with another meeting between President Donald Trump and the North's leader Kim Jong-un planned in a matter of weeks or months.

Kang cited the need for Seoul to deepen relations with other regional powers, which have clout over the security conditions here, and diversify its diplomatic base.

She noted that this year is highly symbolic as the centenary of the March 1st Movement by Korean people against Japan's colonial rule.

In 1919, a group of independence fighters established a de facto government-in-exile in Shanghai, China.

This year is also the 30th anniversary of the fall of the Berlin Wall, she mentioned.

Kang said her ministry has already hired more than 120 officials as part of efforts to improve consular services and move forward the New Southern Policy aimed at strengthening ties with India and Southeast Asian nations.

"Additionally, (we) expect to have around 40 more, sooner or later," she said, adding that work to reorganize the ministry's headquarters is under way.