SEOUL, Jan. 2 (Yonhap) -- North Korean leader Kim Jong-un's warning that he could seek "a new way" if the U.S. insists on sanctions appears to be rhetoric, rather than a threat to go back to the policy of enlarging his country's nuclear arsenal, a think tank said Wednesday.

Kim said in his New Year's address Tuesday that he is firmly committed to complete denuclearization and ready to meet again with U.S. President Donald Trump. But Kim also said he could be "compelled to find a new way" if the U.S. "persists in imposing sanctions and pressure."

Some experts interpreted the remark as a threat to go back to the policy of nuclear weapons development unless the U.S. lifts sanctions on the regime. But the South's state-run think tank Korea Institute for National Unification downplayed the remark.

"It is hard to view the mention of finding a new way as meaning going back to the past 'byongjin' policy of economic and nuclear development or regressing to the past," the think tank said in a report scrutinizing Kim's address.

"Basically, such ways are past ways, rather than a new way," it said.

The think tank said it appears to be appropriate to view it as a "rhetorical" stance meaning he won't give in to U.S. pressure and won't carry out June's summit deal with Trump unless the U.S. takes corresponding steps in exchange for its denuclearization measures.

"If the U.S. responds positively, there is a high possibility of negotiations between the North and the U.S. resuming and a North-U.S. summit taking place at a fast pace early this year," it said.

The North's leader is also expected to try to produce tangible achievements from the peace process to show his people before April's anniversary of this first summit with South Korean President Moon Jae-in last year, the think tank said.

"If the North-U.S. negotiations produce positive results in the first quarter of the year, a visit to Seoul by Chairman Kim could serve as an opportunity to declare the resumption of ... economic cooperation between the South the North," it said. 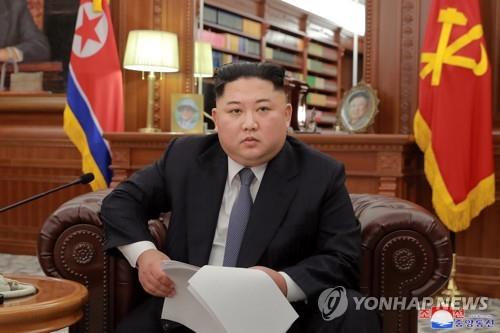