The nation's five major lenders -- KB Kookmin, Shinhan, Woori, KEB Hana and Nonghyup -- had 405.1 trillion won (US$361 billion) in outstanding home-backed loans as of end-December, up slightly over 4 trillion won from the previous month.

December marks the second consecutive month that their combined mortgage lending has increased by the 4 trillion-won range. November saw an on-month gain of 4.2 trillion won.

December's rise was attributed mainly to a jump in collective loans, which are arranged by builders for apartment buyers who have to pay lump sums in installments, while the homes are being constructed. 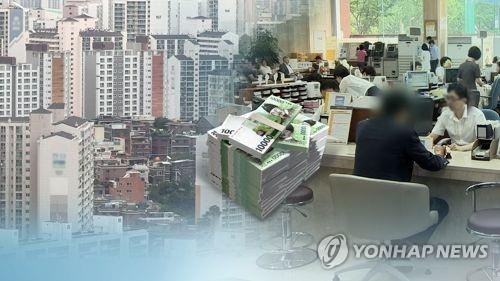 The five banks' collective lending came to around 2.5 trillion won in December, up from 1.6 trillion won in November, as more homebuyers moved into new apartments at year-end.

According to a government tally, more than 50,000 households planned to move into their newly purchased apartments in December, compared with a monthly average of about 38,700 during the January-October period.

Meanwhile, the lenders saw an on-month decrease of 416.9 billion won in unsecured individual loans in December as borrowers paid back debt with year-end bonuses.
(END)