SEOUL, Jan. 3 (Yonhap) -- A former finance ministry official, who has accused the Moon Jae-in government of attempting to replace the CEO of KT&G and pressuring the ministry to issue debt-covering bonds in 2017, disappeared after hinting at committing suicide but was found alive by police on Thursday.

Police said they found Shin Jae-min alive at a motel in the Gwanak-gu district, southern Seoul, at 12:40 p.m. after hours of intensive searching. He was taken to a hospital for a checkup, police said.

The search began after a friend of Shin's called the police's 112 Emergency Response Center at 8:20 a.m. to report that the whistleblower had disappeared after sending a text message to him apparently to indicate his intention to commit suicide. 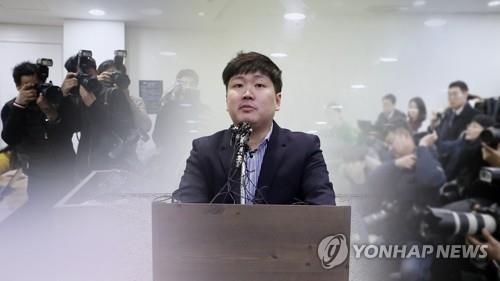 Police said they have found what appeared to be a suicide note and a mobile phone at a residence in Sillim-dong, southern Seoul, where the former official is believed to have stayed.

Police said the note was three pages long and that the phone found in the room was given to Shin by his acquaintance the previous day.

A message that appears to have been written by Shin was also posted in an online community for his alma mater, Korea University, at 11:19 a.m.

"Father and mother, I really love you and I am sorry. Still I seem to have done well," the message read. It was titled "This is the last posting" and mentioned a culture of recognizing whistleblowing and fully disclosing the policymaking process to the public.