"K-pop star Kang Daniel has achieved a new record for the fastest time to gain one million followers on Instagram after joining the social media platform on New Year's Day," the record compiler said on its website.

"Kang quickly gained one million fans, breaking a record previously set by the Pope Francis, who reached 1 million in 12 hours after debuting his verified Vatican Media channel 'franciscus' back in 2016," according to Guinness.

The time it took for Kang to breach 1 million was 11 hours, 36 minutes, it said.

Kang's 11-member group disbanded at the end of 2018 after Mnet's talent survival show Produce 101 picked them up and formed the popular K-pop act.

The band will temporarily team up again for their final concerts set for late January before finally parting ways.

Kang is on his way to launching his solo career to return to and rock the K-pop scene again. 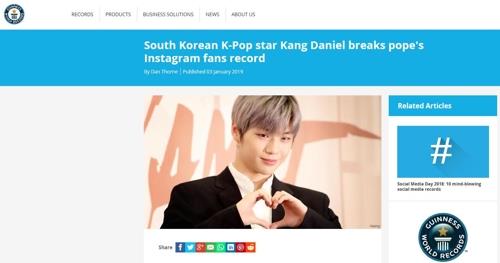