SEOUL, Jan. 4 (Yonhap) -- The parliamentary passage in late November of a new bill aimed at toughening the punishment for drunk driving appears to have had little effect in discouraging driving under the influence (DUI) among South Koreans.

The Supreme Prosecutors' Office said Friday that 91 drivers were arrested and 2,511 others indicted without detention on DUI charges in October and November last year. 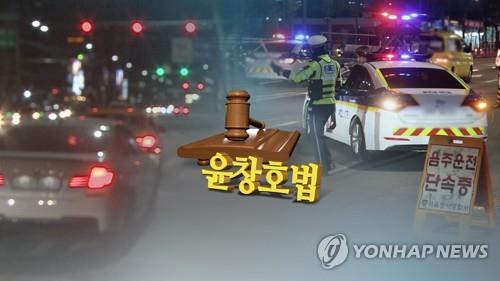 Before and after the National Assembly's approval of the so-called Yoon Chang-ho law on Nov. 29, the prosecution declared its decision to get tougher with DUI offenders, and the police increased crackdowns on drunk drivers. But those repeated warnings appeared to have fallen on deaf ears.

Under the new bill, named after a 22-year-old soldier who died in early November after being struck by a drunk driver in Busan in September and falling into a coma, drunk drivers will face at least three years in jail and up to life imprisonment when DUI results in death. Currently, punishments are lighter, with such offenders facing minimum jail terms of just one year.

Yoon's accident has sparked public outrage at drunk driving and the lenient punishments for offenders.

Prosecutors said there have also been increasing cases of habitual DUI offenses.

For instance, a truck driver with a record of seven DUI violations was recently arrested for driving his vehicle with a blood alcohol concentration of 0.193 percent.

A motorist who had his driver's license revoked after three DUI offenses was arrested recently after being caught driving with a blood alcohol concentration of 0.17 percent. The motorist reportedly avoided imprisonment in his last court hearing after vowing not to drive any vehicle for the rest of his life.

A taxi driver was arrested after injuring three people in a drunk driving accident.

The top prosecutors' office said it will increase arrests of DUI offenders and take other extraordinary measures in order to root out drunk driving.