SEOUL, Jan. 7 (Yonhap) -- Samsung Electronics Co. has posted explosive growth since its inception 50 years ago to emerge as a global tech behemoth, a report showed Monday.

Samsung, which marks its 50th anniversary Sunday, chalked up a record 161.9 trillion won (US$144 billion) in sales in 2017, with last year's figure estimated to exceed it, according to the report by the Korea CXO Institute, a corporate tracker.

The 2017 top line is a whopping 4.37 million times its sales recorded in the first year of its business. Samsung Electronics set out as a small electronics business in 1969, generating a mere 37 million won in sales.

The amount was far dwarfed by the 11.7 billion won registered by GoldStar, the predecessor of LG Electronics Inc. 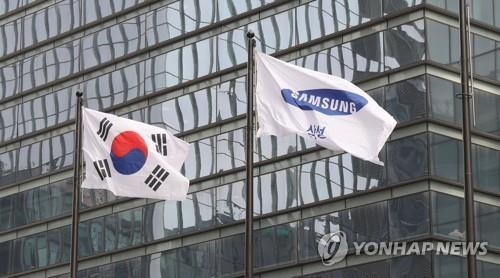 Samsung's bottom line has also been in the black for the 38th consecutive year since 1981.

In addition, Samsung has seen its workforce grow at an exponential rate over the past five decades, becoming the single largest employer in South Korea.

As of end-September 2018, Samsung's domestic workforce came to slightly over 103,000, compared with a mere 36 at the time of its establishment. Including overseas workers, Samsung's payroll stood at more than 320,000 as of end-2017.

The institute attributed Samsung's success to its incessant innovation, aggressive investment and strategy to make its products and services appeal to international customers.

Other factors include its owners with outstanding managerial talent and professional managers who have helped guide Samsung to become a global industry leader, it added.
(END)