SEOUL, Jan. 7 (Yonhap) -- South Koreans ate out less in 2018 than a year earlier as they tightened their belt amid a weak economy, a poll showed Monday.

Visits to restaurants came to 13.7 times per month, with delivered or takeout meals accounting for the remainder.

The survey, conducted by the state-run Korea Agro-Fisheries & Food Trade Corp., also showed that South Koreans ate alone an average of 3.5 times per month while dining out.

South Korea's consumer sentiment was weak in 2018 as the economy lost steam amid weak domestic demand, despite robust exports. 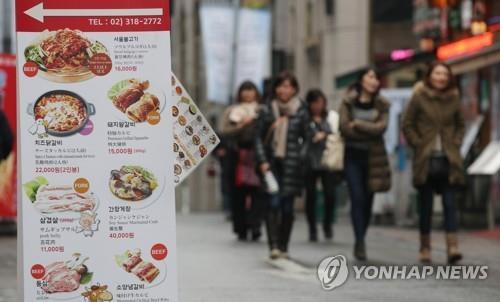 Frequency of eating out drops in 2018

Frequency of eating out drops in 2018