INJE, South Korea, Jan. 7 (Yonhap) -- Preparations for the originator of South Korea's winter festivals are going smoothly, with its opening about 20 days away.

The annual Inje Icefish Festival will run from Jan. 26-Feb. 3 on the vast frozen Soyang Lake in the mountainous county of Inje, 165 km northeast of Seoul.

"The lake has currently frozen (to a depth of) 24 centimeters amid the cold wave and is expected to freeze more than 30 centimeters, the safety level to proceed with the festival, if the current weather conditions continue until its opening," the organizer said. 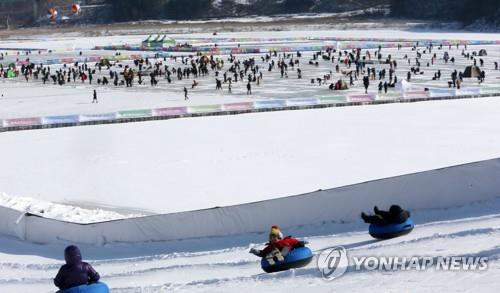 The event was first held on the ice field of Soyang Lake in 1998. Under the ice live smelt, called "bingeo" in Korean. Smelt are a fish species that can live in water colder than 10 C and are most active between December and February.

Since its inception, the festival has made great strides year by year, finally becoming a byword for winter events in the country. It became one of the three biggest festivals as chosen by the government in 2003 and has had significant influence on similar South Korean festivals themed around ice and icefishing.

The centerpiece of the festival is catching smelt out of roughly 20-centimeter-wide ice holes.

To that end, two 100-meter-long and 70-meter-wide fishing zones will be created on the ice field, with 2,300 holes bored for anglers to use.

Visitors can enjoy other activities, ranging from tasting icefish and other foods to playing ice football and gateball and sledding. Grand tent and food villages and ice and snow playgrounds will also be set up.

The organizer plans to complete all the facilities for such activities one week before the festival kicks off.

"We are sure that the 19th Inje Icefish Festival will be a success," the organizer said. 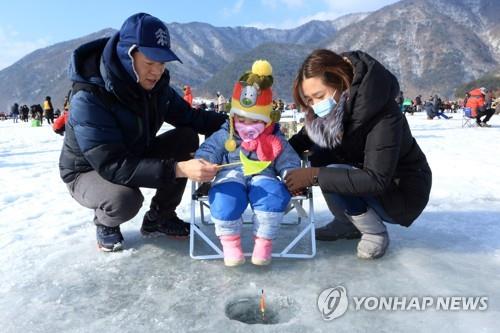