SEOUL, Jan. 7 (Yonhap) -- More than six out of 10 South Koreans are opposed to the burial of former President Chun Doo-hwan at the National Cemetery after his death, a poll released Monday showed.

Local pollster Realmeter's survey of 503 adults nationwide conducted on Friday showed that 61.5 percent are against Chun's burial at the National Cemetery. The poll has a margin of error of plus or minus 4.4 percentage points with a confidence level of 95 percent.

The 87-year-old Chun, who served as president from 1980 to 1988, is legally eligible for burial at the National Cemetery, though he was deprived of privileges as a former president due to his criminal punishment on treason charges. 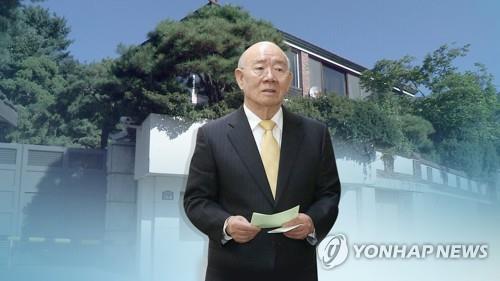 Recently, public sentiment toward Chun has shown signs of changing, after his wife, Lee Soon-ja, publicly called her husband the "father of democracy," citing his adoption of the single term presidential system.

According to the Realmeter poll, 61.5 percent of the respondents said that Chun's burial at the National Cemetery should be blocked, even if it requires a legal revision.

Only 26.8 percent said Chun should be permitted to be buried at the National Cemetery because he was pardoned.

The pollster said another 11.7 percent said they have no idea about the issue or refused to answer.

The objection rate was overwhelmingly high -- 78.7 percent -- among liberal respondents, while conservatives were nearly evenly divided. Among moderate respondents, the rate of objection was higher at 64.2 percent, the pollster noted.

By age, those in their 40s showed the highest objection rate -- 80.2 percent.

Meanwhile, Chun has been in a legal tug-of-war over his refusal to appear in court after being indicted in May last year on charges that his memoir defamed victims of his 1980 crackdown on a pro-democracy revolt in Gwangju.

Separately, the Seoul Metropolitan Government last month seized properties belonging to Chun, who had about 980 million won (US$870,000) in unpaid taxes.