SEOUL, Jan. 7 (Yonhap) -- The U.N. special rapporteur on human rights in North Korea began a trip to Seoul on Monday meant to collect information for his spring report on the communist nation's human rights situation.

He arrived in Seoul earlier in the day for a five-day stay, his fifth trip to the city not far away from North Korea since taking up the post in March 2016. 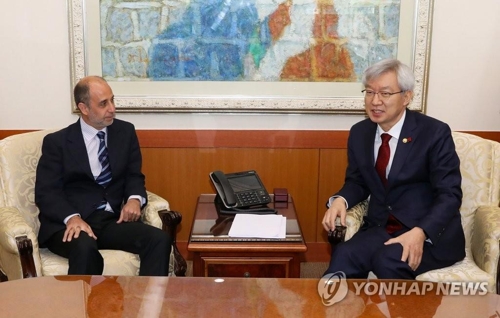 He made his previous trip to Seoul in July last year, during which he sat down with government officials and some former female North Korean restaurants who had defected to the South.

He publicly called for a thorough probe into whether they really wanted to come to the South from China in 2016. He said they might be victims of a defection scam in which South Korea's intelligence authorities were involved under the conservative Park Geun-hye administration at that time.

Ahead of his meeting with Vice Unification Minister Chun Hae-sung, he told reporters that the North Korean restaurant workers have "been an issue from my past missions, and I am collecting information about it."

He added that he will discuss the ongoing peace process and reconciliation on the Korean Peninsula with the South Korean official as well, saying it is "very important" from a human rights point of view.

He will hold a press conference in Seoul on Friday to explain his latest findings and assessments on the North's human rights conditions.

The envoy plans to submit a regular report on his findings and recommendations to the U.N. Human Rights Council in March.