SEOUL, Jan. 7 (Yonhap) -- The floor leaders of rival parties failed Monday to find a compromise over whether to hold a parliamentary hearing over a former government official who claims to be a public interest whistleblower.

During their first meeting in the new year, the bone of contention was whether to hold the hearing over Shin Jae-min, who claimed the presidential office Cheong Wa Dae allegedly abused its power over the country's tobacco maker and the finance ministry.

Also the floor leaders discussed whether to push for a probe by an independent counsel into Cheong Wa Dae's alleged inspection of civilians.

The ruling Democratic Party (DP), the main opposition Liberty Korea Party (LKP) and the minor opposition Bareunmirae Party failed to narrow their differences over the issues.

The 33-year-old Shin claimed the finance ministry attempted to issue deficit-covering bonds worth 4 trillion won (US$3.56 billion) in late 2017 under pressure from the presidential office.

He insisted the move was aimed at boosting government debt for fiscal 2017 to make the former Park Geun-hye administration look bad.

The presidential office and the DP have been also dogged by the allegation raised by Kim Tae-woo, a former special inspector who claimed he had been ordered by Cheong Wa Dae to spy on civilians.

Hong Young-pyo, the floor leader of the DP, rejected the two opposition parties' demand. Instead, he proposed that the National Assembly strengthen bipartisan diplomacy.

"In the near future, North Korean leader Kim Jong-un is expected to visit Seoul," Hong told reporters. "I proposed that the National Assembly will express its support for Kim's possible visit to parliament." 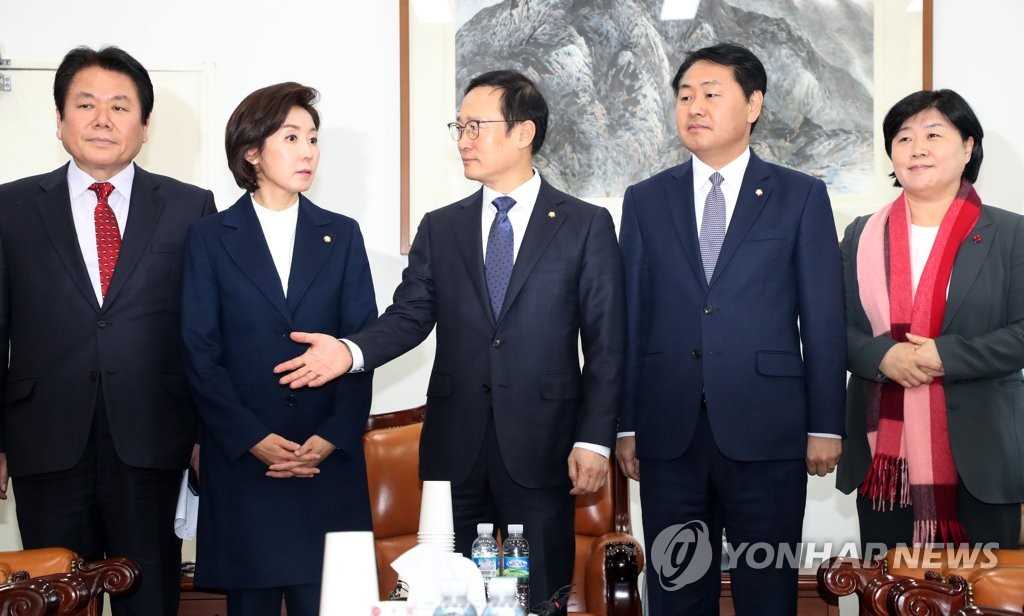