The train passed through the Chinese border city of Dandong around 10:15 p.m., local time, the source said. It is expected to arrive in Beijing just after 10 a.m. Tuesday.

"It hasn't been confirmed whether a senior North Korean official was on the train," the source said, adding that all North Korean trains are painted green on the exterior.

Dozens of security vehicles and officials blocked the roads around the train station in Dandong before the train passed. The roads were reopened afterward. 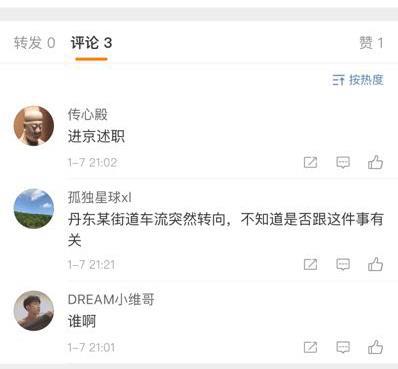 If confirmed, it would be Kim's fourth visit to China in less than a year and possibly lead to a meeting with Chinese President Xi Jinping.

Kim traveled to China and met with Xi ahead of his historic summits with South Korean President Moon Jae-in and U.S. President Donald Trump last year.

The trips were widely seen as a courtesy to the North's only major ally and economic benefactor, and a chance to coordinate strategy.

If held now, a Kim-Xi meeting could precede a second summit between Kim and Trump, which the U.S. president has said will happen soon. On Sunday Trump added that the location will probably be announced in the "not-too-distant future."

The two men agreed at their first summit in June to "work toward" complete denuclearization of the Korean Peninsula in exchange for security guarantees from the U.S.

Progress on implementing the deal has stalled as the U.S. demands concrete steps toward dismantling the regime's nuclear weapons program and the North seeks sanctions relief, among other concessions.

In response to a Yonhap query, a U.S. Central Intelligence Agency spokesperson said "we don't have any guidance regarding your inquiry." The State Department referred all questions to the Chinese government.

Meanwhile, heightened security was noticeable starting Monday afternoon, with additional security personnel placed around Dandong train station and large numbers of police seen at the Yalu River near the border.

Hotels along the river with a view of trains crossing the border could not be booked.

On Chinese microblogging site Weibo, people complained of the road restrictions near the train station and speculated about a possible visit from North Korea.

Xi has reportedly been planning a visit to Pyongyang this year as the allies mark 70 years since establishing diplomatic relations.

Speaking to CNBC, U.S. Secretary of State Mike Pompeo said China has made it clear to the U.S. that it will handle their bilateral trade dispute separately from their joint effort to rid the North of its nuclear program.

Trump has previously accused Beijing of relieving pressure on Pyongyang in order to gain leverage with Washington.

"China has actually been a good partner in our effort to reduce the risk to the world from North Korea's nuclear capability," Pompeo said. "I expect they will continue to do so."
(END)