DUBAI, United Arab Emirates, Jan. 7 (Yonhap) -- South Korean striker Hwang Ui-jo on Monday proved why he is the No. 1 striker for the men's national team, as he scored the winning goal in his side's 1-0 win over the Philippines at the Asian Football Confederation (AFC) Asian Cup.

Hwang broke the scoreless deadlock in the 67th minute in South Korea's Asian Cup Group C opening match against the Philippines at Al Maktoum Stadium in Dubai, the United Arab Emirates. Following a through ball from Lee Chung-yong, Hwang Hee-chan delivered a cross in the box that found Hwang Ui-jo. The Gamba Osaka striker then made a fine turn and unleashed a powerful right-footed strike to hit the back of the net.

This was South Korea's first goal in 2019 as well as the first goal at the Asian Cup. It was also Hwang's fifth goal in 19 international matches. 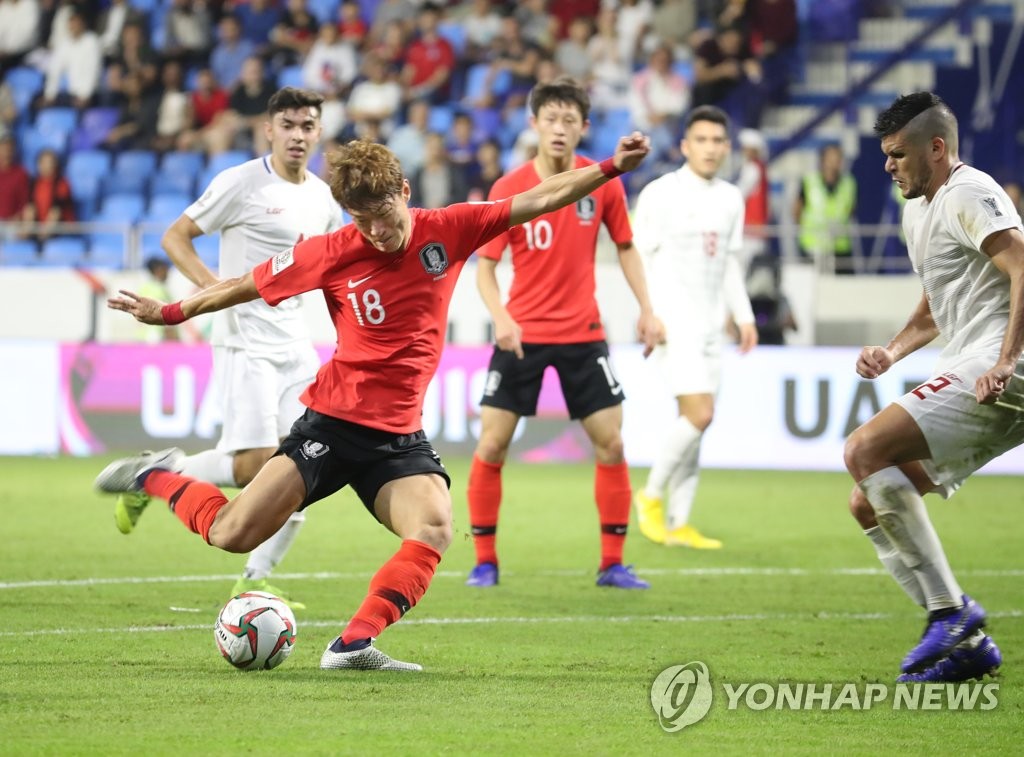 South Korea had big expectations for Hwang at the Asian Cup following his brilliant performance in 2018.

Hwang was pivotal in South Korea's gold medal run at the 18th Asian Games in Indonesia last summer. He was the top scorer of the tournament with nine goals in seven matches.

Following his impressive Asian Games performance, Hwang returned to the senior side for the first time in 11 months and became the main target man for new boss Paulo Bento. He was one of the few players who featured in all seven matches under Bento before the Asian Cup, and was the leading scorer among South Korean players with three goals.

Thanks to his offensive surge, Hwang was named the 2018 Korea Football Association (KFA) Player of the Year.

Hwang had a slow start against the Philippines as he only had few touches in the penalty area with the opponents' tight defense. However, he started to find his attacking rhythm with two quick shots on target in the 40th and the 41st.

Hwang posted his first shot in the second half with a right-footed strike in the 63rd that was denied by Filipino goalkeeper Michael Falkesgaard. But four minutes later, he finally put the Taeguk Warriors on the score board with a powerful shot from close range.

Hwang had a couple more opportunities to bag his second goal of the night, but couldn't come through before the final whistle.

Still, it was enough for Hwang to prove his reputation on the pitch. After all, he attempted seven shots and saw four of them on target, the most on either team in the match. 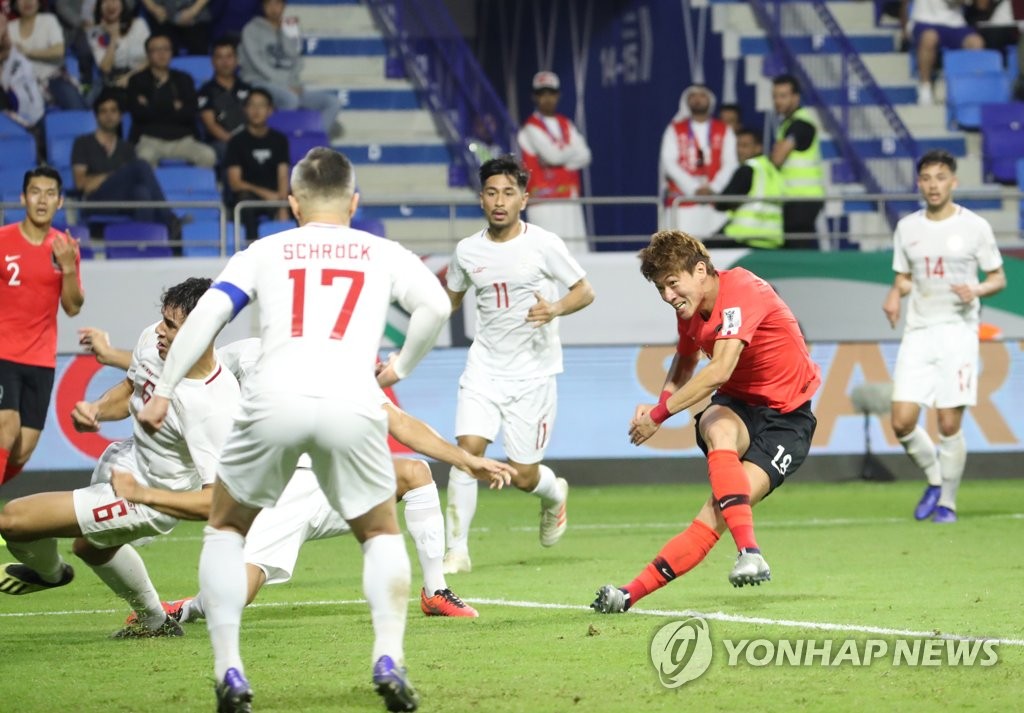 "I felt sorry to my teammates in the first half because I couldn't convert some scoring opportunities," he said after the match. "But I was happy that I was able to score in the second half."

Hwang admitted that his side struggled to score against the Philippines in the first half, but managed to make improvements in the latter half.

"The opponents played defensive football and we didn't have enough space to play," he said. "However, the opponents appeared to be tired in the second half, so it made it easier for us to attack."

Hwang is tasked with leading South Korea's attack until Tottenham Hotspur star Son Heung-min joins the national team. Son is scheduled to arrive in the UAE after Sunday. South Korea will next face Kyrgyzstan in Al Ain on Friday.

"We've just played our first match at the Asian Cup," Hwang said. "We'll prepare thoroughly for the match and will collect a win."