DUBAI, United Arab Emirates, Jan. 8 (Yonhap) -- South Korea defeated the Philippines 1-0 to start their Asian Football Confederation (AFC) Asian Cup campaign, but a troublesome challenge has cropped up as three players are in danger of missing a match.

South Korea, one of the top dogs at the Asian Cup, edged the tournament debutants Philippines in their Group C opening match at Al Maktoum Stadium in Dubai, the United Arab Emirates, on Monday, thanks to a goal from Hwang Ui-jo.

Despite the win, the Taeguk Warriors weren't all smiles as Lee Yong, Jung Woo-young and Kim Jin-su are now at risk of yellow-card accumulation suspension. 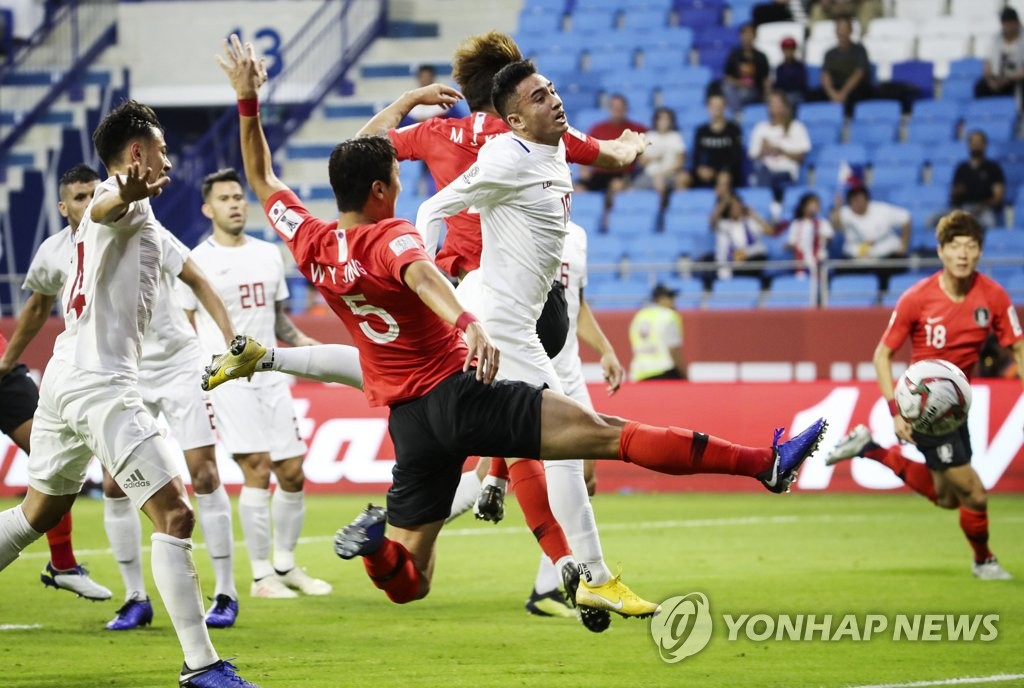 Under the tournament rules, cautions will be wiped out after the quarterfinal stage. This means that the three South Korean players have to carry their cautions to the remaining Group C matches against Kyrgyzstan and China, as well as the round of 16 and the quarterfinal matches. Receiving one more yellow card during that run will result in an automatic one match suspension.

South Korea, ranked 53rd in the latest FIFA rankings, fourth highest among AFC members, were thought to have less trouble defending the Philippines, currently sitting at 116th in the world. There were some dangerous moments from the Philippines' counterattacks, but the three players apparently picked up yellow cards with needless fouls.

Lee, a veteran right back, was the first South Korean to be cautioned at the tournament with his foul on Javier Patino in the 25th minute. He brought down Patino in the middle when South Korea lost the ball, but with two center backs waiting to defend the Filipino forward at the back, Lee's challenge was considered unnecessary.

In the 52nd, Jung was booked for a similar foul on Patino who attempted to dribble past the South Korea defensive midfielder on the right flank. In the 77th, Kim was shown a yellow card after the referee ruled that the left back used his elbow on Patrick Reichelt to win an aerial battle. South Korea completed the match with three yellow cards, one more than the Philippines. 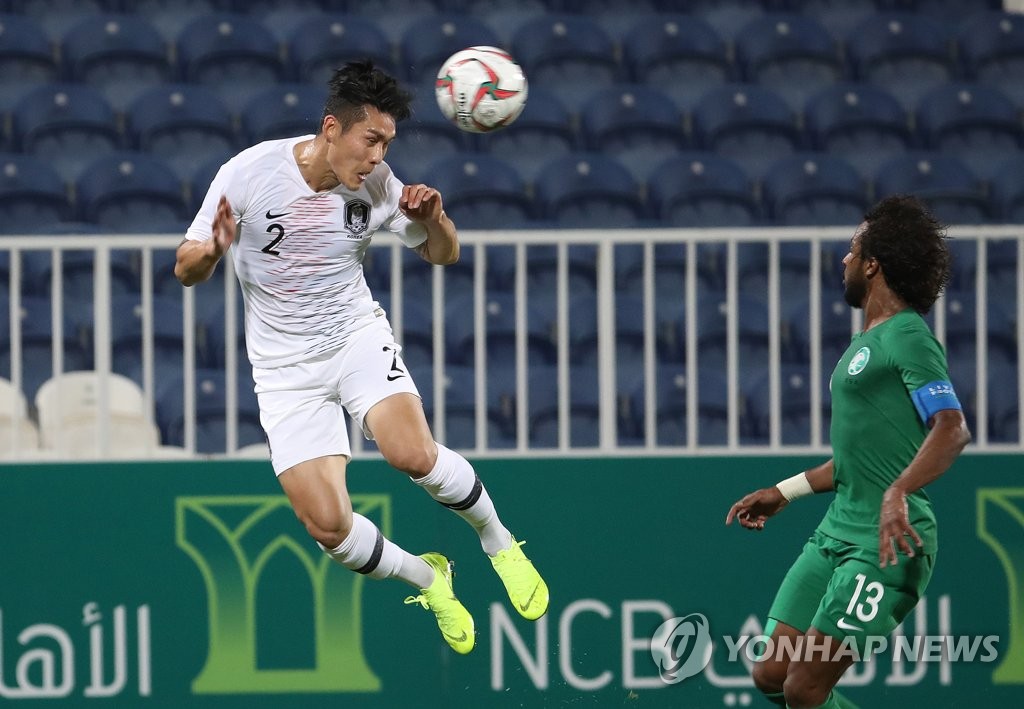 Losing any of these three players in the upcoming matches will likely give a headache to South Korea head coach Paulo Bento.

Lee, 32, is the oldest player on the South Korean roster and has started all matches under Bento since the Portuguese took over the helm in August. The Jeonbuk Hyundai Motors defender, who has made 39 appearances for South Korea, has been a key component in Bento's system with his overlapping runs and crosses from the right flank.

South Korea have Kim Moon-hwan as his back up, but the Busan IPark right back has only four caps and has yet to experience a major tournament. Lee was South Korea's starting right back at the 2018 FIFA World Cup in Russia. 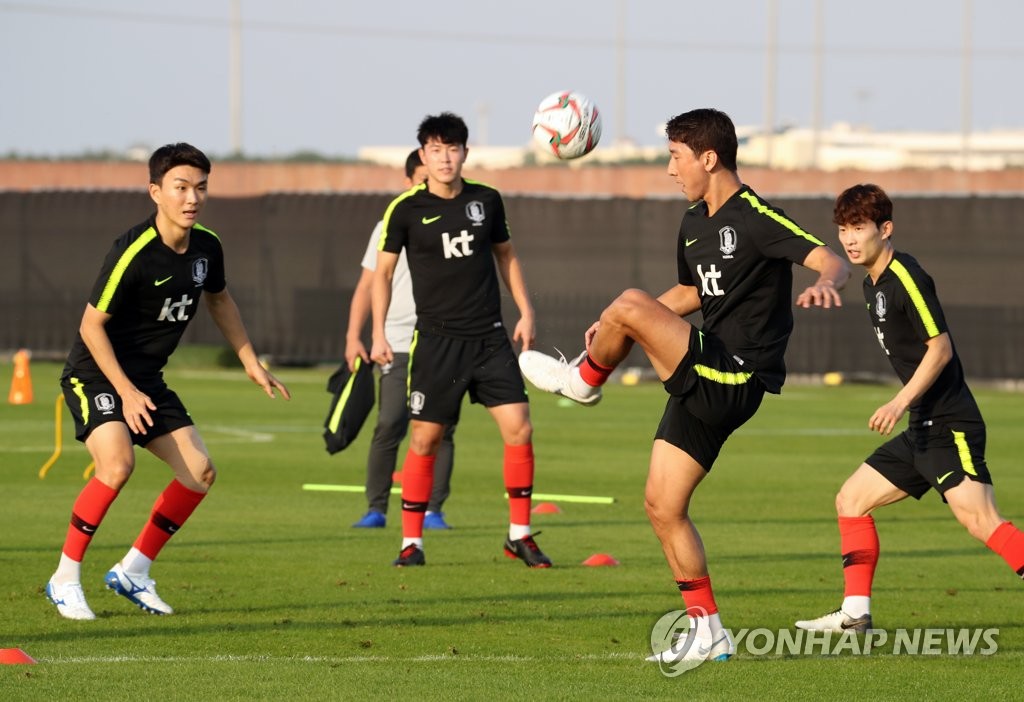 Jung is a defensive midfielder who partners with Ki Sung-yueng to control the center. The 29-year-old, who plays next to Xavi Hernandez and Gabi Fernandez at Qatari side Al Sadd, also represented South Korea at the 2018 World Cup and played five of the seven matches under Bento before the Asian Cup. He has two goals in 39 international matches.

Kim, who plays with Jeonbuk in the K League 1, wasn't Bento's first choice left back for the Asian Cup, but he has emerged as an important resource after the team's main left back Hong Chul apparently struggled to find his form following an injury during training.

For Kim, the match against the Philippines was his first competitive match under Bento. It was also his first international action since a friendly match against Northern Ireland in March 2018, in which he sustained a left knee injury and missed the 2018 World Cup.

The 26-year-old, who had a stint with German Bundesliga outfit Hoffenheim, is in his second Asian Cup. He was South Korea's starting left back at the 2015 Asian Cup in Australia, where his side settled for a runners-up finish. 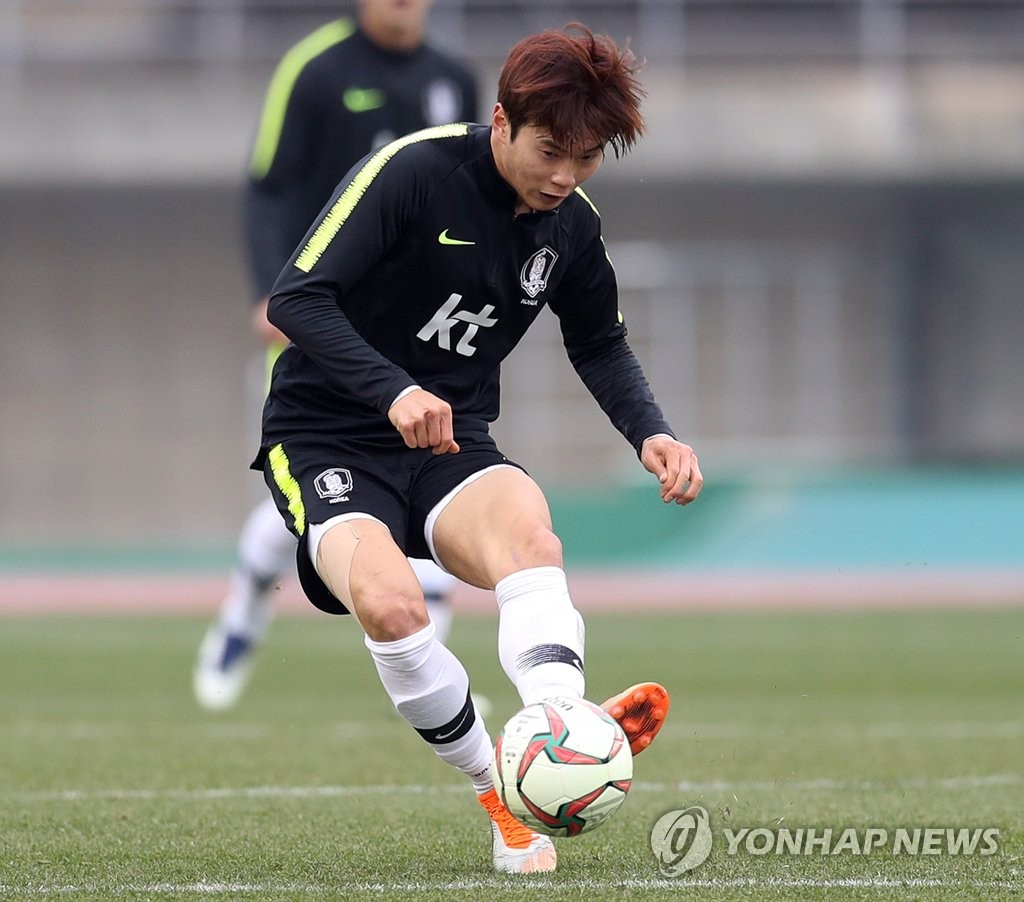