LAS VEGAS, Jan. 7 (Yonhap) -- South Korean home appliance maker LG Electronics Inc. on Monday unveiled the world's first rollable OLED television, which can appear and disappear from a base unit with a click of a remote control.

The LG Signature OLED TV R model, which measures 65 inches and features a 4K resolution display, was showcased ahead of the Consumer Electronics Show (CES) in Las Vegas, which runs from Tuesday to Friday. 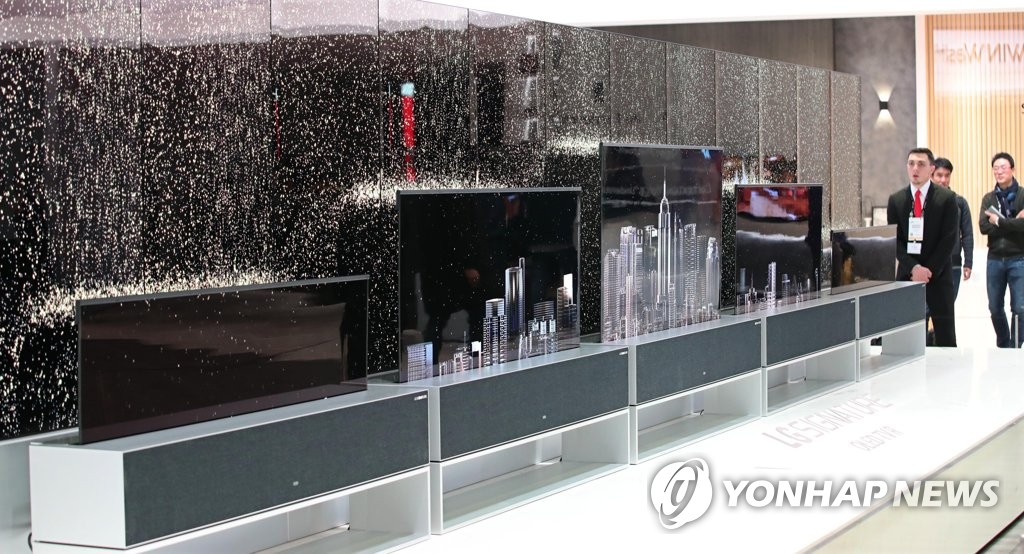 The company said consumers can also set the TV to show a "line" view, which retracts the screen into the base about three-quarters of the way. In this mode, users can listen to music and look at photos.

The product is particularly appealing for people who want a large screen for watching movies but don't want it to overpower their living space.

"We will show the essence of the display revolution with the world's first rollable OLED TV," LG Electronics' head of home entertainment Kwon Bong-seok said during a press conference.

LG said it will release the premium TV in the Korean market in the second half of the year and target other markets afterward, without elaborating on details of the price and schedule.

The company also introduced an 8K OLED TV, which delivers quadruple the resolution of 4K, saying it will be available later this year.

LG Display Co., which supplies panels to the home appliance maker, was confident about the quality of the rollable display, saying it had undergone 100,000 bending tests.

"As the rollable panel is a 'premium of premium product,' we are talking about rollable TV panels with LG Electronics, as well as other clients," Han Sang-beom, the chief executive of LG Display, said during a meeting with reporters. "We will target the premium market rather than increasing the sales volume."

Han said its rival Samsung Display's plan to develop quantum dot (QD) OLED panels is not a "threat" but "a good momentum" to expand the cutting-edge display market.

"QD-OLED panels are also based on OLED technologies," Han said. "If competitors enter the OLED market, it will accelerate the technological innovation in terms of devices and materials."

In October, Samsung's display production arm said it has been developing QD-OLED technology, which is seen as a potential competitor to LG's OLED technology.

Samsung Display hasn't revealed details of the production plan, but it is pushing to start pilot production in the second half of 2019, according to local reports.