LAS VEGAS, Jan. 7 (Yonhap) -- Samsung Electronics Co. said Monday it plans to roll out its first fifth-generation (5G) Galaxy smartphone in the United States within the first half of the year.

The global tech giant unveiled the ambitious plan during a press conference on its future vision and key business projects for 2019 ahead of the Consumer Electronics Show (CES) slated to start in Las Vegas on Tuesday for a four-day run.

Samsung Electronics President Kim Hyun-suk, who heads the consumer electronics business, said the company has earned 5G certification from the U.S. Federal Communications Commission in the runup to the envisioned launch.

"Samsung has been trying to go beyond the connectivity among devices and achieve intelligence of things for everyone to enable more people to enjoy the benefits of technological advances in a hyper-connected society," Kim said. 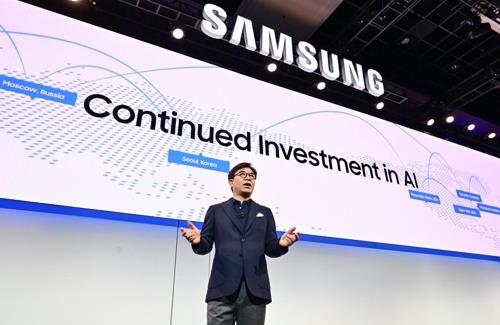 To that end, Samsung will create new innovation and services by linking the company's diverse products with its artificial intelligence (AI) platform Bixby.

The executive further said Samsung is focusing all resources to bolster its AI capabilities.

At the press conference, Samsung also showcased its 98-inch QLED 8K TV for the first time in the world.

The QLED 8K is one of Samsung Electronics' latest premium TVs. The tech giant has been promoting QLED TVs as their high-end products, which utilize quantum dot technology.

Samsung says the QLED 8K boasts outstanding resolution and color based on the brightness of 4,000 nits. A nit is a unit of luminance equal to one candela per square meter.

Samsung earlier said it has joined hands with archrival Apple to provide iTunes movies and TV shows on its premium smart televisions. 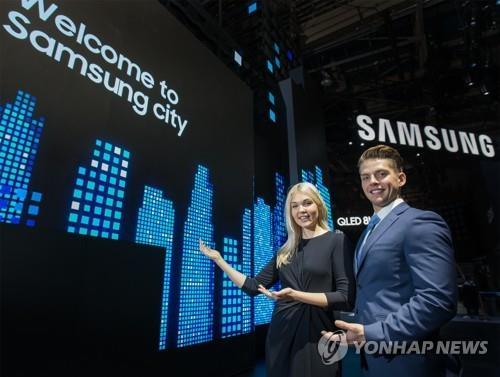 Samsung set to unveil 5G smartphone in U.S. in H1

Samsung set to unveil 5G smartphone in U.S. in H1