According to data compiled by several brokerage houses, Daewoo Shipbuilding is forecast to log a net profit of some 260 billion won (US$232 million) last year on sales of 8.9 trillion won.

Its operating income is estimated at 800 billion won in 2018.

The company's better than expected bottom line might have been aided by increased orders for LNG carriers, and its cost-cutting efforts paid off, industry sources said.

Hyundai Heavy is expected to post a net loss of some 40 billion won on sales of 12.9 trillion won last year. Its operating loss is estimated at around 300 billion won. Hyundai Heavy's loss may come as the world's largest shipyard failed to reduce fixed costs.

Hyundai Heavy said earlier that it and two other shipbuilding affiliates target securing combined deals worth $15.9 billion this year in the shipbuilding segment, marking a 20.7 percent rise from last year's goal of $13.2 billion. The three players won $13.7 billion worth of deals in 2018. 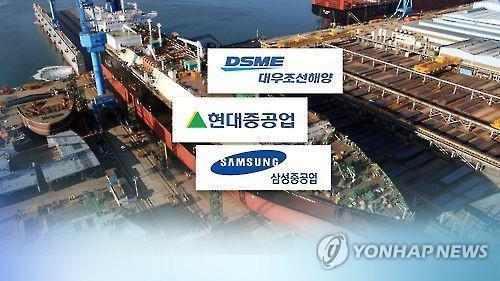