SEOUL, Jan. 8 (Yonhap) -- As North Korean leader Kim Jong-un has effectively kicked off his new year summit diplomacy with a trip to China this week, South Korea expressed hope Tuesday that it will be conducive to progress in the denuclearization and peace process.

"The government expects that summit and high-level exchanges between the North and China, including a meeting between Chairman Kim Jong-un and President Xi Jinping, will be able to contribute to the complete denuclearization and establishment of permanent peace on the Korean Peninsula," Noh Kyu-duk, spokesman for the Ministry of Foreign Affairs, said at a press briefing.

South Korea will keep trying to foster the "virtuous cycle" of denuclearization and such diplomatic activities by the Koreas and regional powers, he added. 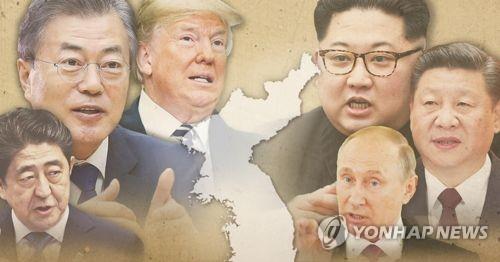 Earlier in the day, Kim arrived in Beijing. The North's state media said he will be staying in China through Thursday.

It's Kim's fourth known trip to China since he took power in late 2011 and the first in half a year.

It marks the start of full-scale diplomacy in 2019 by Pyongyang and regional powers on denuclearization and a peace vision.

South Korean officials agree that Kim's China visit is seen as a prelude to another meeting with U.S. President Donald Trump.

Last year, Kim traveled to China not long before and after his Singapore summit with Trump on June 12.

"There's an analysis that a second North Korea-U.S. summit will likely take place soon, given last year's case. In the eyes of us, it's a natural analysis as well," a foreign ministry official said on the condition of anonymity.

Trump also openly suggested that his second meeting with Kim is imminent.

The two sides have been negotiating a summit venue and an announcement could be made in the near future, he told reporters.

Russia reportedly expects Kim to travel to Moscow in the first half of this year.

Experts view Pyongyang and Beijing as seeking to give an impression that bilateral ties are faring well for their strategic interests.

The North apparently wants to show to the Trump administration that it has a major patron in a bid to gain the upper hand in the upcoming bargaining.

In his New Year's address, the North's leader said his communist regime is firmly committed to dialogue-based complete denuclearization but that it will get a Plan B ready in case Washington sticks to pressure and sanctions.

He used the words "a different path," which North Korea watchers construed as meaning the option of retaining its nuclear arsenal and pursuing economic growth on its own.

For Kim, Xi's backing will be a sort of "insurance" in the event that his talks with Trump break down.

In the Jan. 1 speech, Kim proposed a multilateral forum to discuss ways to replace the armistice on the peninsula with a peace regime.

"It was a message to China that North Korea won't bypass it in the peace process," Shin Beom-chul, a researcher at the Asan Institute for Policy Studies, said.

Xi responded with an early invitation for Kim to visit Beijing.

Amid a trade dispute with Washington, it's in the interests of Beijing to show its close ties with Pyongyang and clout on issues related to the Korean Peninsula.

"It's good (for him) to strengthen trilateral cooperation among North Korea, China and Russia," he said.

(LEAD) N. Korean leader commences another round of summit diplomacy

(LEAD) N. Korean leader commences another round of summit diplomacy