The two countries will square off on March 26 in Hanoi as the reigning champions of their regional tournaments. South Korea won the East Asian Football Federation (EAFF) E-1 Football Championship in 2017, while Vietnam captured the ASEAN Football Federation (AFF) Suzuki Cup in December.

On Dec. 15, the EAFF and the AFF reached an agreement to pit the winners of these tournaments against each other in a biennial showdown dubbed the AFF-EAFF Champions Trophy. The AFF champions will host these matches. 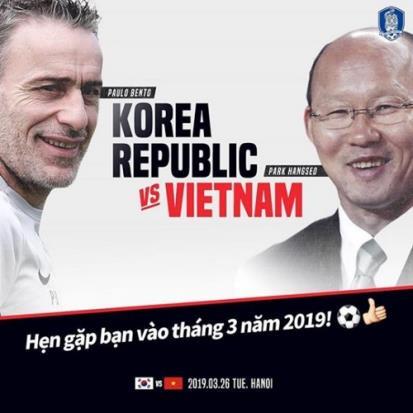 According to the Korea Football Association (KFA), Vietnam, coached by South Korean Park Hang-seo, had requested the match moved to June, citing scheduling conflict with their under-23 team. Park manages both the U-23 and the senior squads.

But South Korea, coached by former Portugal boss Paulo Bento, will also have other matches during the June 3-11 period on the FIFA International Match Calendar. The two sides then agreed to go ahead with the March 26 date.

Park has worked magic with the upstart nation since taking over in 2017. Vietnam finished second at the Asian Football Confederation (AFC) U-23 Championship in January last year. Then at the Asian Games in Indonesia, Vietnam lost to Park's native South Korea 3-1 in the semifinals before finishing in fourth place. They had never reached beyond the round of 16 in their four previous Asian Games appearances.

The Suzuki Cup title over Malaysia was Vietnam's first regional championship in 10 years.

Both Vietnam and South Korea are competing at the AFC Asian Cup in the United Arab Emirates. South Korea beat the Philippines 1-0 in their first Group C match in Dubai, and Vietnam will take on Iraq to open their Group D play later Tuesday in Abu Dhabi.