In a regulatory filing, the shipbuilder said HHIC-Phil Inc., which operates the Subic yard, has filed for an insolvency scheme in the archipelago country.

Hanjin Heavy and its affiliate have been suffering from a drop in new orders amid the protracted slump in the global shipbuilding sector.

In 2004, Hanjin Heavy built the shipyard in the Philippines to boost its overall competitiveness.

The Subic shipyard's assets have been valued at 1.84 trillion won (US$1.64 billion), with the number of employees standing at some 4,000.

Hanjin Heavy has been conducting massive restructuring efforts since 2016 by selling non-core assets. So far, the shipyard has met some 65 percent of the 2.1 trillion-won restructuring scheme proposed by its creditors.

Its other shipyard here has secured 1.2 trillion won worth of orders to keep it busy for three years. 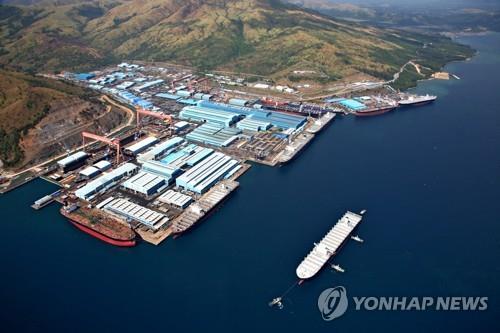