SEOUL, Jan. 8 (Yonhap) -- The government will pay 860 billion won (US$766 million) in subsidies to all universities and colleges nationwide this year to help upgrade their academic competitiveness, the Ministry of Education said Tuesday.

Unlike in previous years, this year's subsidies will be distributed in accordance with school size without prior evaluation or the imposition of academic goals, it noted.

Each of the recipients will be given a free hand to launch various reform measures with the state subsidies this year, the ministry said, adding their achievements will determine the amount of next year's individual subsidies. 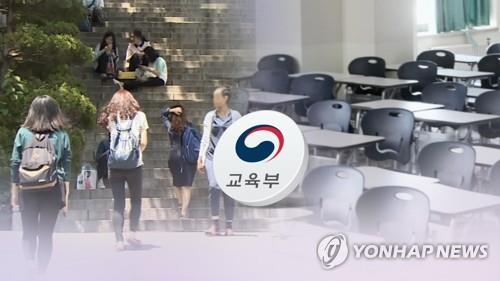 Critics have said that the education ministry's imposition of specific academic goals in exchange for the annual subsidy payments undermines the autonomy of universities and colleges and triggers a consumptive competition among them for a bigger share of the subsidies.

Despite the deregulation, however, universities and colleges will still be prohibited from spending the state subsidies on personnel expenses for school staff, construction of new buildings or purchase of land.

Notably, the level of employment safety for part-time instructors will be among the evaluation criteria in determining the amount of next year's subsidies, ministry officials said.

The move is intended to enhance job security for thousands of part-time instructors after the National Assembly approved a revision of the Higher Education Act last year to extend the guaranteed employment period and wages for vulnerable lecturers.

Contrary to the purpose of the legal revision, local universities and colleges have taken measures to reduce the number of part-time lecturers to cut costs.

Gov't to give 860 billion won in subsidies to universities, colleges this year

Gov't to give 860 billion won in subsidies to universities, colleges this year