WASHINGTON, Jan. 8 (Yonhap) -- North Korean leader Kim Jong-un demonstrated in his surprise visit to China this week that Beijing may be the "new way" he said he could pursue if negotiations with the U.S. go awry, analysts here said Tuesday.

Kim is on his fourth trip to the ally in less than a year amid an ongoing impasse between Pyongyang and Washington over how far the regime will go to dismantle its nuclear weapons program and what concessions the U.S. will give in return.

Kim reportedly met Chinese President Xi Jinping shortly after his arrival in Beijing Tuesday, but no details of the meeting have emerged.

"Kim is eager to remind the Trump administration that he does have diplomatic and economic options besides what Washington and Seoul can offer," said Harry Kazianis, a North Korea expert at the Center for the National Interest.

"In fact, during his New Year's Day speech, Kim's 'new way' that he referred to may well have been a veiled threat to move closer to Beijing," he said. 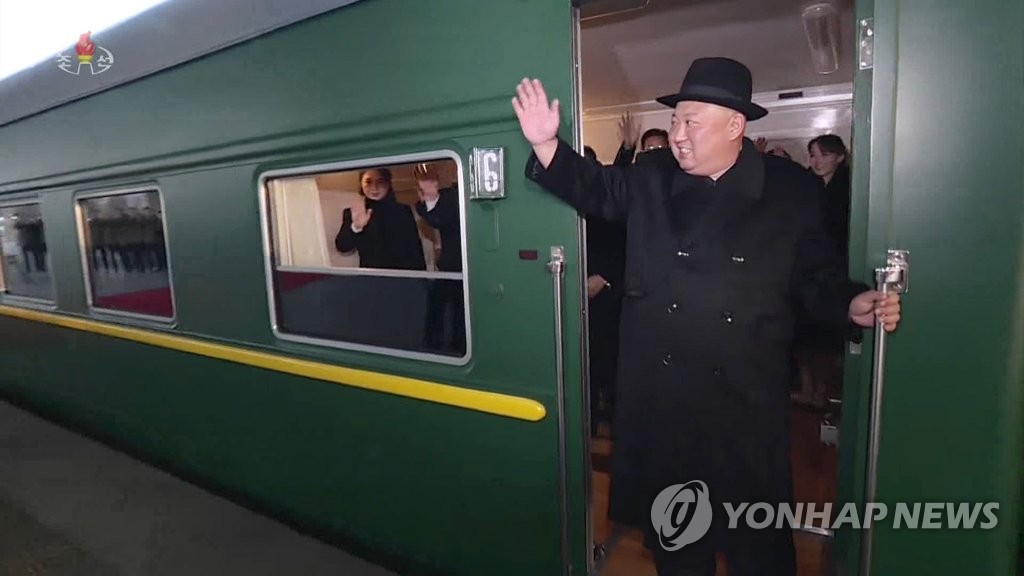 The North Korean leader said in his speech that if the U.S. did not keep its "promise" and maintained sanctions and pressure on the regime, the North may be "compelled to find a new way" to defend its sovereignty and interests and achieve peace and stability on the Korean Peninsula.

He did not elaborate on what the "new way" may be, but Kazianis underscored that China is still the North's lifeline.

"China could easily turn Trump's 'maximum pressure' strategy into nothing more than a memory as almost all North Korea's external trade flows through China in some capacity," he said.

Trump and Kim have kept expectations of a second summit alive by saying they both want to meet again. They agreed at their first summit in Singapore in June to work toward complete denuclearization of the Korean Peninsula in exchange for security guarantees from the U.S., but progress has been slow.

In the meantime Trump said this week that the location of the next summit will probably be announced "in the not-too-distant future."

"Before Kim Jong-un meets with Trump, he is going to want to hear China's thoughts on the second summit," Ken Gause, a North Korea expert at CNA Corp., told Yonhap. "He will also want promises from China on what Beijing is willing to do if a second summit does not happen or does not go well.

"China is a possible alternative pathway that Kim Jong-un referenced in his New Year's Day speech if the U.S. does not ease sanctions and seriously engage," he added.

Kim's trip may indeed portend an imminent U.S.-North Korea summit, according to Bruce Klingner, senior research fellow for Northeast Asia at The Heritage Foundation. Trump has said it will happen in January or February.

"Presumably, Kim is both briefing Xi on his plans and seeking Chinese support," Klingner told Yonhap. "Kim may also be attempting to signal Washington that it has other options than the U.S. for receiving economic benefits. While the Trump administration has vowed it won't lower sanctions, Pyongyang again demanded their reduction in Kim's New Year's Day speech."

Meanwhile, the timing of Kim's visit could not be any better for Xi, Kazianis said.

"With Chinese and U.S. officials meeting to discuss how to end the growing trade war between the two superpowers, it shows Beijing clearly has a North Korea card to play if it sees fit," he said.