SEOUL, Jan. 9 (Yonhap) -- South Korean Defense Minister Jeong Kyeong-doo said Wednesday that the country's new hub Army command will have to play a key role in the future alliance with the United States.

Speaking at the ribbon-cutting ceremony for the Ground Operation Command (GOC), he said it needs to spearhead "all joint and combined operations" on the ground. The ceremony was held at the unit's headquarters in Yongin, just south of Seoul.

The GOC leads seven regional corps and one expeditionary corps, as well as a logistical support command, an artillery bridge and an intelligence unit.

It replaces the Army's First and Third Army commands amid the military's efforts to streamline the command system and enhance the effectiveness of operational capabilities.

In the event of a war on the peninsula, the GOC will play a role as the Ground Component Command in charge of ground combat operations. 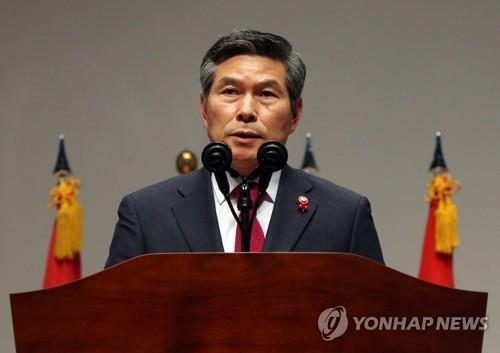 It's a major component of South Korea's preparations to regain its wartime operational control (OPCON) from the United States.

"In particular, an assessment of the initial operational capability to test our military's ability to carry out leading operations is planned this year," Jeong said.

Gen. Kim Un-yong, who used to command the Third Army, has been appointed chief of the GOC.

"As the top-ranked command of ground forces to carry out joint and combined operations, the GOC will come to the fore to complete missions to meet the circumstances of future warfare and create an advanced barracks culture," Kim said in a speech.

A day earlier, he received the unit's flag from President Moon Jae-in.

South Korea floated the idea of creating such a combined ground operation command in 1998.

The Army said the birth of the GOC will be the starting point for the full-scale implementation of the Moon administration's Defense Reform 2.0 scheme.

The Army, which has around 480,000 troops, is a key element in the country's 620,000-strong armed forces. The government plans to reduce the latter number to half a million by 2022 under the reform drive.