SEOUL, Jan. 9 (Yonhap) -- South Korea will try to continue their winning start at a continental football tournament when they face Kyrgyzstan this week.

South Korea, led by head coach Paulo Bento, will play Kyrgyzstan in their second match at the Asian Football Confederation (AFC) Asian Cup. The match will be held at Hazza bin Zayed Stadium in Al Ain, the United Arab Emirates, with the kick-off time set at 8 p.m. Friday (local time), or 1 a.m. Saturday in Seoul. Both teams are in Group C, along with China and the Philippines.

South Korea are coming off a tough 1-0 win over the Philippines in Dubai on Monday. Kyrgyzstan suffered a 2-1 defeat to China earlier the same day. 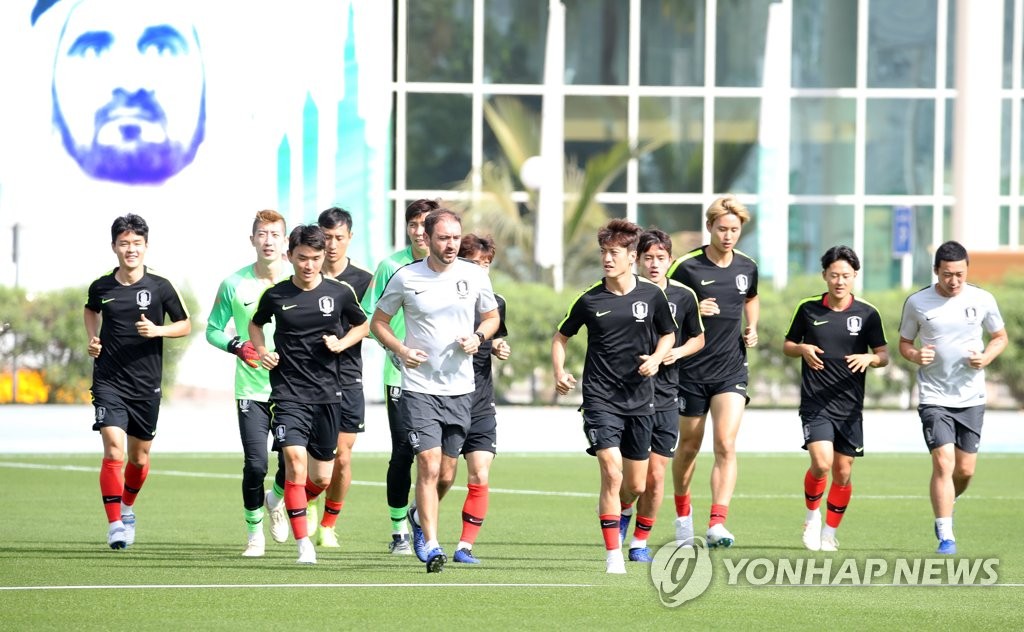 On paper, South Korea, ranked 53rd in the latest FIFA rankings, fourth highest among AFC members, are the heavy favorites with abundant international experience and two continental titles under their belt, although their last Asian Cup victory came in 1960. Kyrgyzstan, No. 91 in the FIFA rankings, 12th best in Asia, are in their first Asian Cup.

The match in Al Ain will be the first meeting between the two at the senior level, but their under-23 teams faced each other five months ago at the 18th Asian Games in Indonesia. South Korea then beat Kyrgyzstan 1-0 on Son Heung-min's goal and went on to claim the gold medal.

On South Korea's 23-man Asian Cup roster, eight players faced Kyrgyzstan at the Asian Games. Among them is striker Hwang Ui-jo, who scored the winning goal against the Philippines. The 2018 Korea Football Association (KFA) Player of the Year was the top scorer at the Asian Games, with nine goals in seven matches.

On Kyrgyzstan's side, six players who performed at the 18th Asian Games are on Aleksandr Krestinin's Asian Cup squad, including the U-23 captain, Tamirlan Kozubaev. 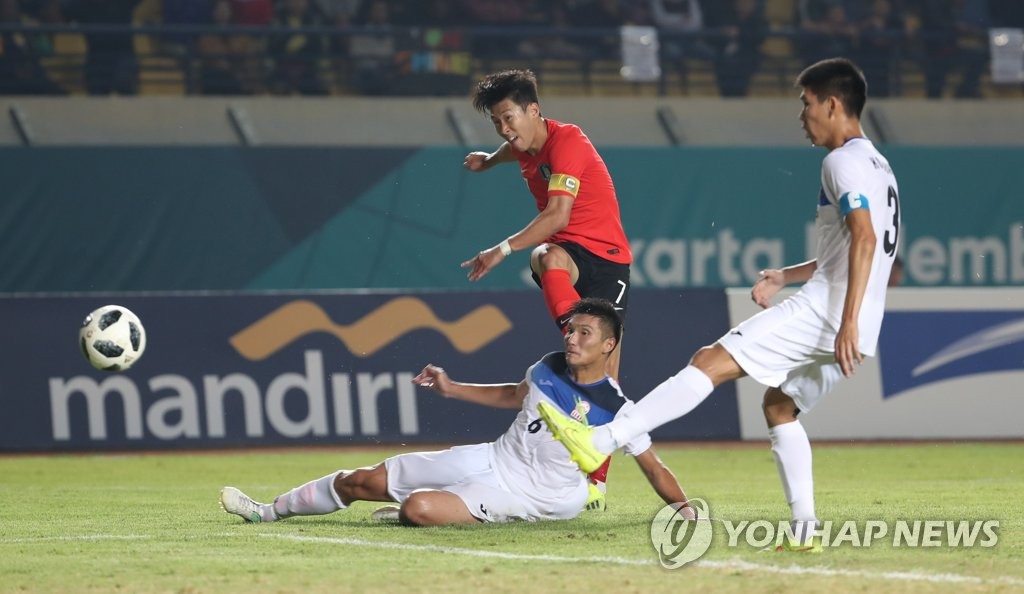 The Taeguk Warriors are expected to face tough challenges from Kyrgyzstan, who are desperately looking to rebound from their opening match defeat. Since one more loss will likely push them to the tournament exit, Kyrgyzstan are expected to give everything they have against South Korea. In this year's Asian Cup, where 24 are teams competing, the top two teams from each group and the four best third-placed teams will advance to the round of 16.

South Korea, currently on an eight-match undefeated streak under Bento, have their own problems heading into the second Group C match. With their attacking ace Son only scheduled to join the team after Sunday, they will also miss key midfielder Ki Sung-yueng on the pitch.

Ki, South Korea's most experienced player, with 110 caps, sustained a minor hamstring injury against the Philippines, and the KFA said the Newcastle United midfielder needs to rest for at least one week.

Ki's place is likely to be filled by Hwang In-beom, who replaced Ki during Monday's match. The 22-year-old is one of the Asian Games participants.

Ju Se-jong, who boasts long-range passing skills, can also play in Ki's position. He is best known for assisting Son's goal in South Korea's 2-0 win over Germany at the 2018 FIFA World Cup. 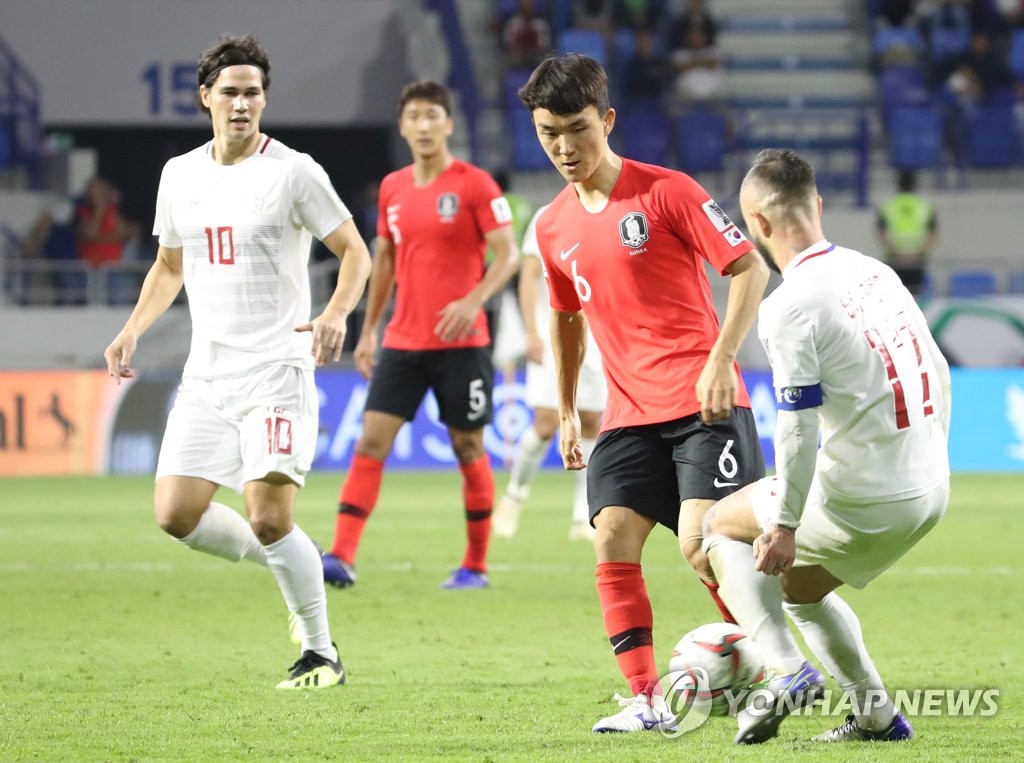 South Korea had a tough time unlocking the Philippines' dogged defense in the first match, with a lack of accuracy in shooting and passing near the penalty area holding them back. Bento's side will focus on improving their precision this time.

South Korea used their usual 4-2-3-1 formation in the first match and are likely to stick to it against Kyrgyzstan. But Bento could make several changes to the starting lineup.

South Korea also added Hellas Verona winger Lee Seung-woo as their attacking option. The 21-year-old was called up as a replacement for injured Na Sang-ho, and arrived in the UAE on Monday, hours before South Korea's first match.

One weak spot for South Korea could be the left back position.

Kim Jin-su played his first international match since March 2018 when he started against the Philippines but didn't impress, especially when attacking. He had ten crosses but made only three. The fitness of Bento's first-choice left back, Hong Chul, who suffered a minor injury during training, is still unclear. 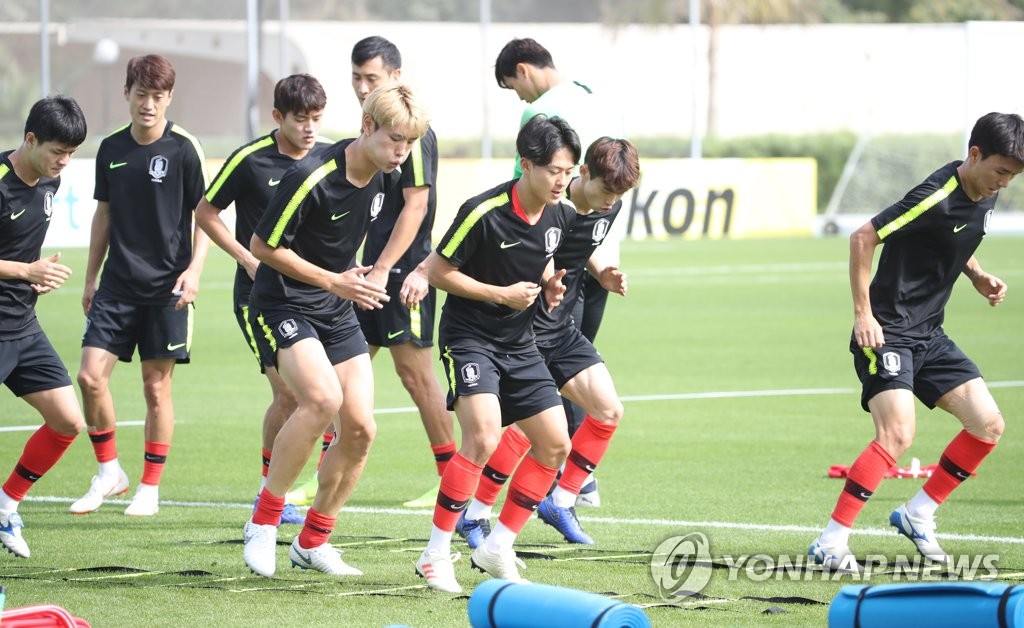 South Korea also need to be aware of yellow cards. Along with Kim Jin-su, right back Lee Yong and defensive midfielder Jung Woo-young were booked against the Philippines, and receiving one more yellow card in the Kyrgyzstan match will rule them out for their Group C closing match against China on Dec. 16.