Prosecutors from the Seoul Central District Prosecutors' Office visited the Seoul Detention Center, south of Seoul, where Park is currently serving a jail term, in the morning to question her face-to-face about her alleged collusion with Yang. But she rejected a meeting with them.

Prosecutors have been investigating allegations that Yang, who led the top court from 2011 to 2017, sought to use trials as bargaining chips in its dealings with the then Park government to achieve his long-envisioned plan of establishing a separate court of appeals. Yang has been asked to appear before prosecutors Friday to face questioning as a criminal suspect. 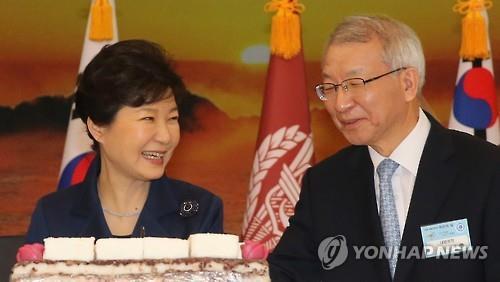 Park is suspected of having asked Yang to delay court hearings on South Korean victims of Japan's wartime forced labor in exchange for her help in the establishment of a new court of appeals and overseas dispatch of judges.

Prosecutors said they have secured circumstantial evidence through questioning of former and incumbent officials at the top court, Cheong Wa Dae and the foreign ministry that Park had issued specific instructions on the procedures for court hearings on forced labor victims in accordance with diplomatic negotiations with Japan.

Park, who was president from 2013 to 2017, is now serving a combined jail term of 33 years on various charges, including corruption and abuse of power.

She has been refusing to appear in court or meet with prosecutors since October 2017.