SEOUL, Jan. 9 (Yonhap) -- A weekly civic rally calling for the Japanese government to give an official apology and compensation to the Korean victims of the Japanese army's World War II sexual enslavement marked its 27th anniversary Wednesday.

The first Wednesday rally was held Jan. 8, 1992, on the occasion of then Japanese Prime Minister Kiichi Miyazawa's visit to Seoul. The Korean Council for Justice and Remembrance for the Issues of Military Sexual Slavery by Japan organized it.

Some 200,000 Asian women, mostly Koreans, are estimated to have been forced into sexual slavery at front-line Japanese military brothels during the war. They are euphemistically called "comfort women."

"We've long made a seven-point demand to Japan, including an official apology, compensation, punishment of those responsible for the crime, and the establishment of a memorial and a historical museum," the council said in a statement during its 1,369th protest in front of the Japanese Embassy in Seoul.

"But the Japanese government has yet to admit the crime and to apologize for it," it said.

The rally has been held usually in the presence of former comfort women, but they could not attend the anniversary due to health problems.

At present, only 25 former comfort women are alive in the country. 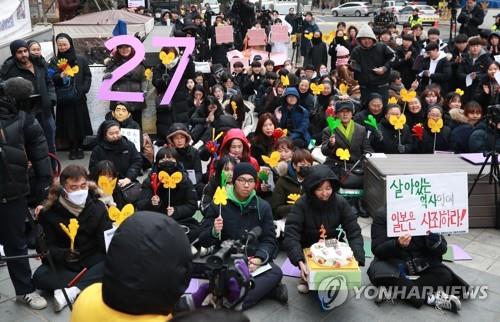