The K League discipline committee said Kim will be suspended for 15 games and will have to pay a fine of 8 million won (US$7,130) for his misconduct. His 15-game suspension will come into effect if he registers with a K League club.

Kim was released from Suwon on Friday over the drunk driving charges.

"Kim has damaged the K League's reputation just after the league announced it would mete out heavy punishment to those who are charged for drunk driving," the K League said. "However, we also considered that Kim had reported his drunk driving to the club and that he was already punished by Suwon."

Kim was involved in a car accident in Seoul on Dec. 28, and police found that he had been driving under the influence of alcohol. Kim then immediately reported the DUI case to Suwon. He later issued an apology to his fans and Suwon.

Kim was selected for the South Korean national team between 2014 and 2015 but failed to make his international debut. 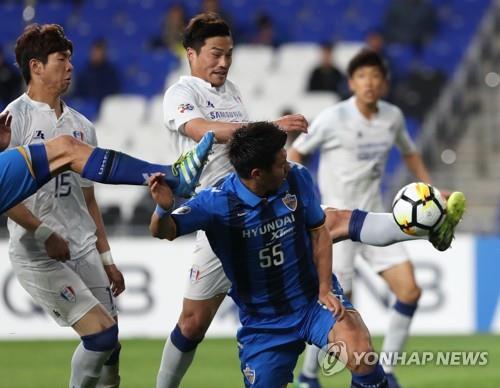