Citing an informed source, the Asahi Shimbun said that the reply to the letter Kim sent to Trump in December appears to be related to the plan for the second summit between Trump and Kim, and that the reply has convinced him that the summit will take place. 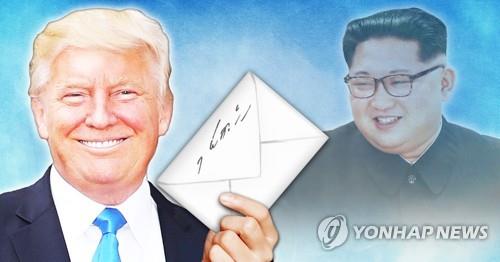 A White House National Security Council official declined to comment on the report when asked by Yonhap.

Trump acknowledged last week that he had received a "great letter" from Kim, but did not disclose its contents or say whether he had replied.

Both men have said they want to meet again to follow up on their historic first summit in Singapore in June, during which Kim committed to work toward complete denuclearization of the Korean Peninsula in exchange for security guarantees from the U.S.

Trump said this week that the location will probably be announced "in the not-too-distant future."

Kim headed home on Wednesday after talks with Chinese President Xi Jinping, which analysts said appear aimed at coordinating their positions and securing diplomatic support from China, the North's longtime ally, ahead of the summit with Trump.
(END)