Lee made the remarks during his meeting with Prime Minister Lee Nak-yon, who visited the tech giant's headquarters in Suwon, just south of Seoul, earlier in the day.

"(Vice Chairman Lee) deeply cares about job creation and ways to co-exist with small- and mid-sized companies," the prime minister told reporters after the meeting.

"Though he often feels some pressure, he vowed that Samsung will carry out its duties as the country's leading company," the prime minister added. The vice chairman was at the scene with the prime minister, but he refrained from directly answering questions from reporters.

It is the first time that the prime minister had a solo meeting with one of the chiefs of the country's four largest conglomerates since he took office in May 2017.

The visit was apparently aimed at grasping the progress of the fifth-generation (5G) network technologies and asking for Samsung to play a role in spurring investment and job creation. President Moon Jae-in has prioritized boosting the slowing economy and creating jobs this year.

"With regards to the 5G technologies, I've been concerned about the production of equipment that meets the requirements that South Korea has set ... But I was very much relieved by vice chairman Lee's recent moves," the prime minister said.

South Korea is to commercialize 5G services in March, making it the first country to do so.

Samsung Electronics has picked 5G network technology as one of its four new growth engines. Last week, the company started production of its 5G network-related equipment at its factory in Suwon.

Praising Samsung's role in the country's outstanding exports of semiconductors, Lee said he wants to hear from Samsung that it is "confident" in memory chip and 5G equipment sectors down the road.

"There have been some worrisome reports, but I hope can quickly overcome such difficulties," the prime minister said in an apparent reference to the tech behemoth's disappointing earnings in the fourth quarter of last year. 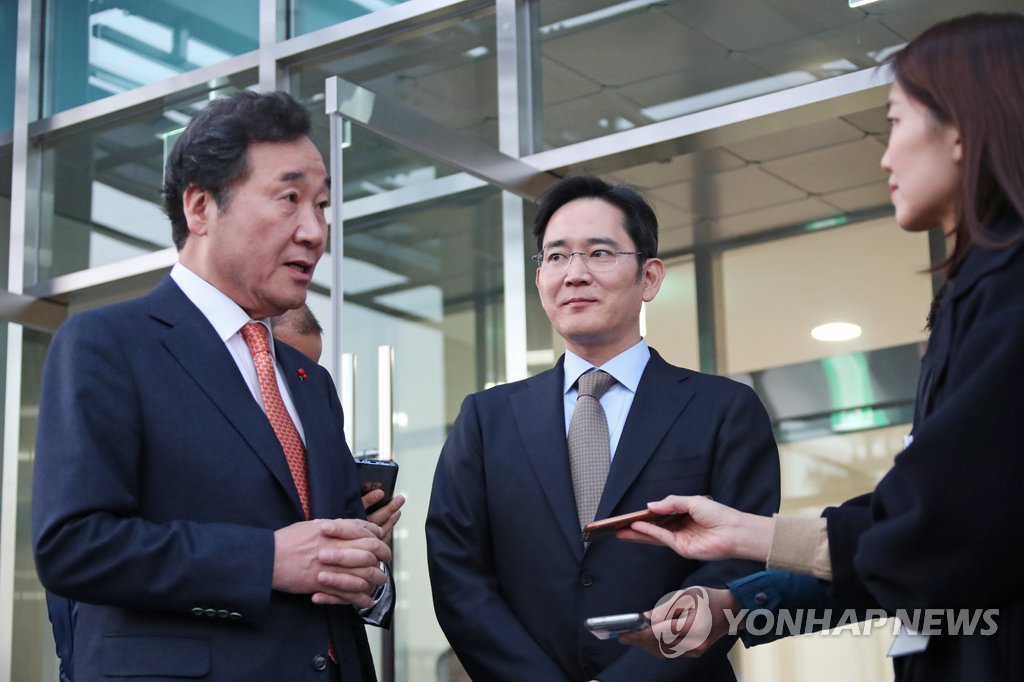