SEOUL, Jan. 10 (Yonhap) -- The government is considering granting special pardons to minor offenders and others deemed fit in the celebration of the 100th anniversary of the anti-Japanese independence movement and the establishment of the Korean provisional government, officials said Thursday.

The Ministry of Justice has sent documents to district police agencies in the country notifying them of the plan and asking them to submit a list of possible candidates, officials familiar with the matter said.

It could be an extensive list, since the Moon Jae-in government may seek to give amnesty to as many people as possible given the special circumstances around this year's celebrations, they said.

Korea is set to mark the centennial of the March 1 Independence Movement of 1919 against Japan's colonial rule and the establishment of the Provisional Government of the Republic of Korea in Shanghai.

Beneficiaries may include protesters convicted of staging rallies against the U.S. deployment of its missile defense system, known as THAAD and those convicted of protesting against a naval base on Jeju island.

The government granted special pardons to 6,400 people at the end of 2017, President Moon's first year in office. Most of them were minor offenders or political protesters, while one was a former lawmaker.

It remains to be seen whether the Moon government will grant pardons to Han Sang-kyun, a former leader of the militant umbrella labor organization Korea Confederation of Trade Unions, and Lee Seok-ki, a former lawmaker of a now-defunct progressive party convicted of treason charges.

Calls by liberals to pardon the two have been rising since Moon took office, but the government didn't include them in the amnesty. Pardoning them would have sparked strong protests from conservative opposition parties.

The president has made it clear his government will not allow clemency for those convicted of violating corruption laws. 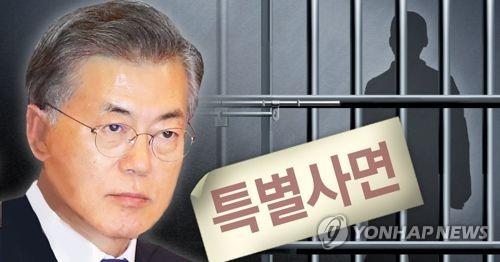