While addressing the nation before his first press conference in the new year, the president said the government too is well-aware of difficulties facing Asia's fourth-largest economy but that that is only the more reason the country should continue to push for income-led growth.

"An economic policy shift can be truly frightening. It will take time and may generate controversy," the president said in his nationally broadcast speech.

"However, it is the path that we must take. We will achieve the goal of an innovative, inclusive nation by all means while sufficiently making up for any shortcomings," he said. 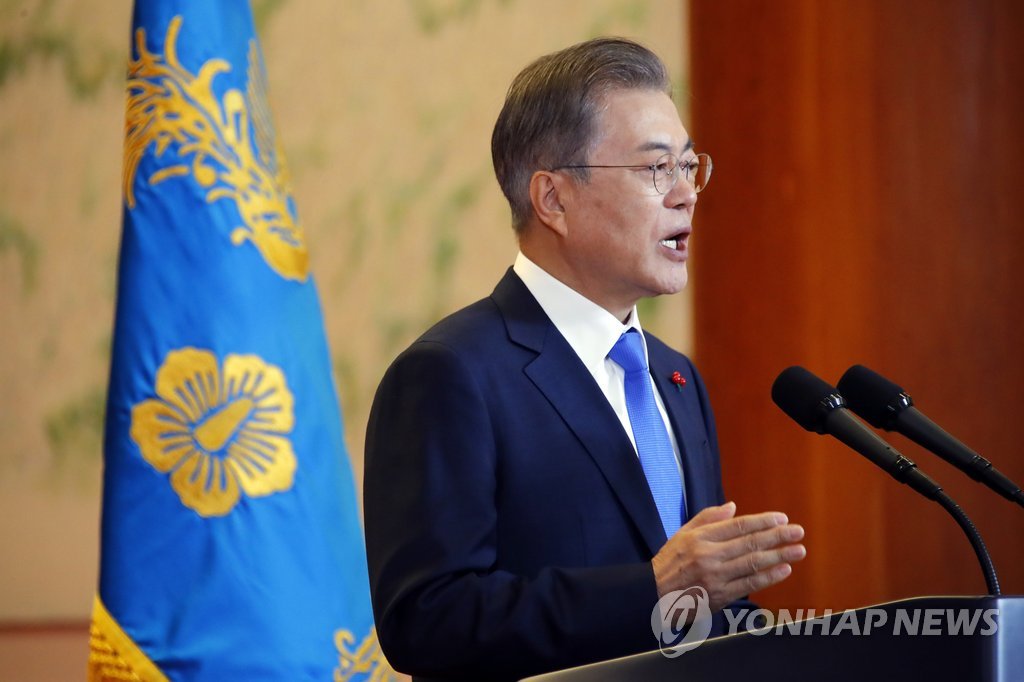 The national address was soon followed by a question-and-answer session, attended by some 200 journalists at the presidential office Cheong Wa Dae.

Moon's remarks come amid growing concerns that the country's economy may be slowing, partly due to increased costs and job reductions that may have been caused by the very tactic Moon introduced at the start of his presidency in May 2017.

The income-led growth, along with people-oriented growth, seeks to boost the economy by increasing the average income of households and thus their spending.

The president insisted the problem of fair distribution was not unique to the country and that the rest of the globe was moving in a similar direction to address the issue.

"Economic inequality, also dubbed the 1% versus 99% society or a winner-take-all economy, is not a problem unique to us. It is a common challenge facing the entire world," he said.

"The people-centered economy and innovative, inclusive nation being pursued by my administration are precisely in line with such thinking. Our goal is to create an economy in which all prosper together on the basis of a fair economy with a level playing field, where innovative and income-driven growth enable sustainable development," Moon added.

The president acknowledged some shortcomings in the process, especially in creating new jobs.

On Wednesday, the finance ministry reported the country's jobless rate stood at 3.8 percent in 2018, the highest since 2001, while the number of people employed grew only by 97,000 from a year earlier, the lowest on-year gain since 2009.

"My administration is taking this economic situation very seriously. However, I want to emphasize that the hardships we are suffering now are even stronger proof of the need for the people-centered economy," the president said in his nationally televised address.

He vowed to make progress this year.

"This year's objective is to make the people clearly see signs in their own lives that the government's economic policy is heading in the right direction," he said.

"Peace can drive economic growth. The desire to prosper lies in the people of both South and North Korea," he said.

Moon said the country will also work to resume its economic cooperation with the North, which currently is blocked by various international sanctions placed on the communist state for its past military provocations that included six nuclear tests.

"My administration will cooperate with the international community, including the United States, to resolve the remaining issues (to inter-Korean economic cooperation), such as international sanctions, as soon as possible," Moon said.