Paik started in Girona's 1-1 draw against Atletico Madrid in the first leg of Spanish King's Cup (Copa del Rey) round of 16 match at Montilivi Stadium in Girona, Spain, on Wednesday (local time).

Paik, who joined Girona in August 2017 from the FC Barcelona B team, had a clause in his contract that allows him to join the first team of the Spanish La Liga club starting in the 2018-19 season. He has been training with the first team of Girona since July 2018 but mainly played competitive matches with the Girona B team.

Paik, 21, was first named to Girona's first-team match in August 2018 for his club's La Liga action against Real Madrid but failed to appear on the pitch.

Against Atletico Madrid, Paik started as an attacking midfielder but wasn't able to collect a goal or an assist. He was replaced by Portu in the 67th minute.

Paik has yet to represent South Korea at the senior level. He has seven goals in 20 caps for the South Korean under-20 national team. He was South Korea's key player at the 2017 FIFA U-20 World Cup. 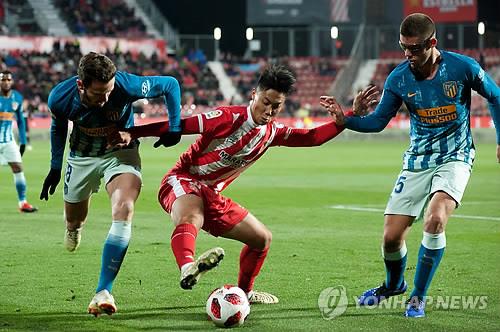