SEOUL, Jan. 11 (Yonhap) -- Former Supreme Court Chief Justice Yang Sung-tae defended the court system and himself Friday as he was about to be quizzed by prosecutors over a string of allegations in a widening power abuse scandal.

Yang appeared outside the top court building in southern Seoul ahead of the interrogation scheduled for 9:30 a.m., amid tight security and loud crowds of protesters calling for his punishment.

"I have but myself to blame for all of this. Responsibility rests with me," he told reporters. "I am also deeply sorry to the public for causing concern for the things that happened under my term."

But he rejected the mounting claims that the judiciary was involved in the alleged interference of trials, stressing "the majority of court officials are devoted to serving the public in the name of justice."

"We have never acted against our own conscious and the rule of law. And I believe in them," Yang said.

He also called on the public to trust the judiciary and to watch the probe with "no bias."

"If (my officials) had done anything wrong, I would take the blame for it, but I do also want this investigation to be done from an objective point of view, with no bias or prejudice."

The 71-year-old stands accused of using or seeking to use trials as political leverage to lobby the office of then President Park Geun-hye to get her approval for the establishment of a separate court of appeals, his long-envisioned plan.

He is the first former head of South Korea's Supreme Court to face a prosecution questioning as a criminal suspect. He faces at least 40 counts of charges, including abuse of power and leaking state secrets. 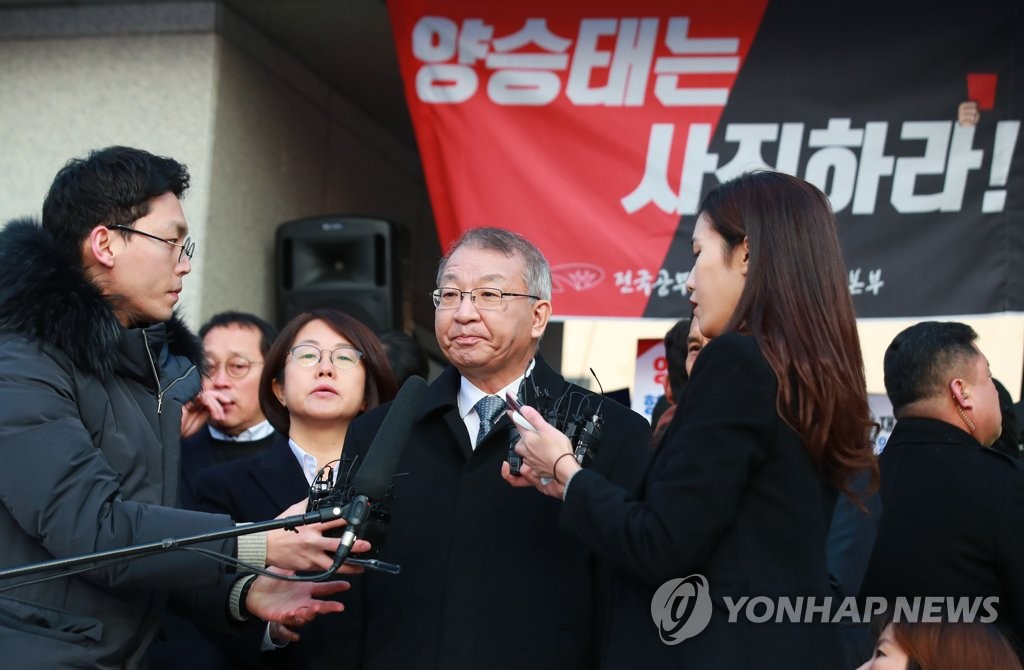 The former veteran justice led the top court from 2011 to September 2017, when he retired.

He is also accused of having orchestrated a delay in the deliberation of a damages suit filed by Korean victims of Japan's wartime forced labor, to curry favor with the former president who was seeking amicable relations with Tokyo.

The mounting scandal has put the entire judiciary under unprecedented intense scrutiny, mingled with mixed reactions within the judicial circle toward the widening probe.