SEOUL, Jan. 11 (Yonhap) -- In theory, hydrogen seems like the perfect energy source to power a vehicle, in that it is the most prevalent element in nature, it can be turned into electricity and emits only water.

It has been several decades since the zero-emission cars entered the public consciousness as a possible way of the future, but hydrogen still hasn't broken into the mainstream as a fuel source for vehicles, with only a handful of models on the market today.

FCEVs run on pressurized hydrogen and create electricity by chemically fusing it with oxygen in a fuel stack.

While on a visit to France in October, President Moon Jae-in attended an event to test-drive Hyundai's Nexo and charge it at a station in downtown Paris, his second time trying out the cars. He mentioned hydrogen cars a total of six times in 2018, reflecting the interest his administration has in the technology. 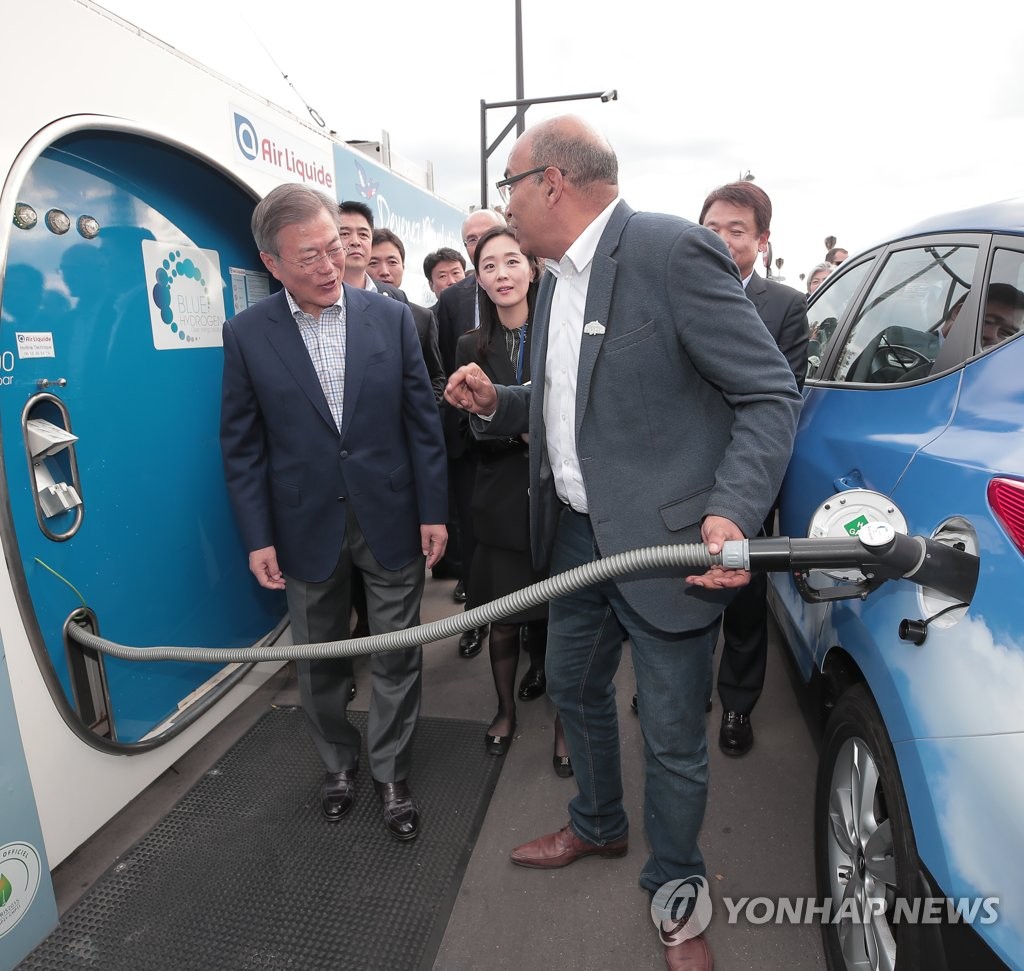 Unlike electric cars that take several hours to fully charge, Nexo takes only five minutes to top up on hydrogen. It can run up to 600 kilometers on a full charge, longer than most electric cars.

Hyundai says Nexo is more than a "zero-emission" vehicle. The car can actually clean air as it drives with an advanced filtering system that can capture very fine dust in the atmosphere.

But the question is, where to fill up?

Currently, about 10 hydrogen pumps are in operation across the nation, far fewer than the nearly 4,000 public charging stations for EVs. In 2018 EV sales reached 54,000.

To solve the hydrogen conundrum, expanding the refueling infrastructure is a key prerequisite, but the steep cost is something that needs to be tackled.

This is in addition to the price of the Nexo itself, which will set someone back by around 70 million won (US$62,472). This places it squarely in the premium range for SUVs.

To boost demand in the early adoption stage, the government provides tax incentives and subsidies, which vary depending on where you live.

For example, residents of Pyeongtaek, south of Seoul, can get a 50 percent discount on their purchase starting from this year until 2022, according to the city government.

Despite the drawbacks in the initial stage, Hyundai has outlined an ambitious vision to invest 7.6 trillion won in FCEV by 2030, betting big on hydrogen as the energy source of the future.

"We will lead the commercialization of the FCEV and push for integration with various industries at the forefront of the hydrogen economy," Hyundai Motor Group vice chairman Chung Eui-Sun said during the company's new year ceremony held last week.

The group plans to expand the fuel cell stack production capacity to 700,000 units by 2030.

At a government level, the Ministry of Trade, Industry and Energy unveiled a vision to supply 65,000 hydrogen vehicles, sharply up from the previous target of 15,000 units, and build 310 charging stations by 2022.

The government vowed to work with the industry to establish recharging infrastructure.

In December, Hyundai, the state-run Korea Gas Corp and a dozen other companies established a special purpose company, HyNet, to build about 100 hydrogen charging stations and distribution centers by 2022.

In the public transportation sector, Hyundai plans to supply 30 hydrogen-powered buses to six major cities this year. The move is a joint effort with local governments. 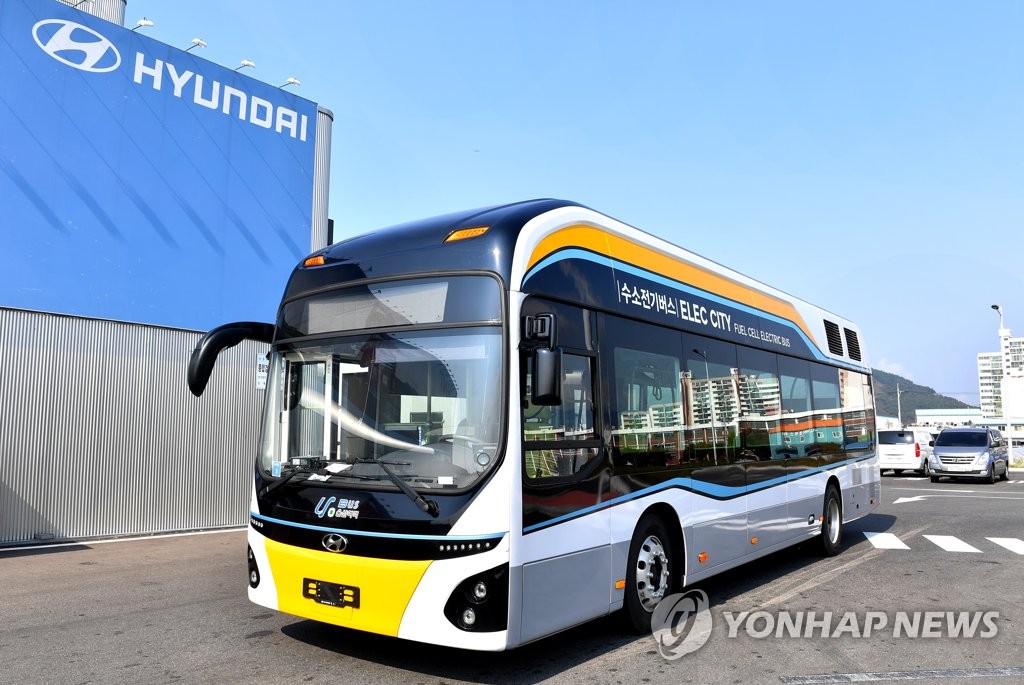 Following a pilot program in the southeastern city of Ulsan, a hydrogen bus was launched on a regular route in Seoul in November to test its feasibility and raise public awareness of eco-friendly vehicles.

"It is comfortable and quiet. The bus actually sounds like an electric train," Shin Yeon-cheol, a driver of Seoul's first hydrogen bus, said while driving the bus from southern Seoul to the downtown area. "When going uphill, the hydrogen bus is more powerful than compressed natural gas buses."

Market watchers expect commercial vehicles and trucks to lead the hydrogen trend in the early stage, with government backing, because fuel cell cars are better suited for bigger vehicles.

"Hydrogen fuel cells better fit commercial uses because bus and trucks have more space for hydrogen tanks and air pressurizer, and they run on a stable speed rather than going into high speed," Na Seung-doo, an analyst at SK Securities, said.

Industry officials say the key challenges are how to make people understand that hydrogen-fueled cars are clean and safe and to expand refueling infrastructure.

"Ultimately, we need to change the public misperception that hydrogen energy is dangerous," a Hyundai Motor spokesperson said. "Based on the people's understanding, expanding hydrogen charging infrastructure is expected to gain steam."