BERLIN, Jan. 11 (Yonhap) -- The head coach of the unified Korean men's handball team has praised his players for showing their fighting spirit even though they suffered a defeat in its historic world championship debut.

Korea fell to world No. 1 Germany 30-19 at the International Handball Federation (IHF) World Men's Handball Championship at Mercedes-Benz Arena in Berlin on Thursday. This was the first international appearance by a joint Korean handball team, men's or women's.

"Honestly, there was a lot of pressure for us to play against the world's top team Germany in the opening match," said Cho Young-shin, a South Korean head coach who leads the Korean squad at the worlds. "But I told the players that we should give a meaningful performance to the crowd here with our joint effort."

The Koreas agreed to combine their men's handball teams at a meeting of sports administrators on Nov. 2 last year. The unified team of 16 South Koreans and four North Koreans, began training together in Berlin on Dec. 22.

"We had a short period of time to build our teamwork, but we tried our best," he said. "Even though we were the underdogs, our players weren't intimidated by the opponents, and I want to praise our players for that."

"We don't have tall players, but we'll maximize the pace of our players and will display organized moves in the next match," he said.

"Although we dropped our opening match, we will work hard to play better in the remaining games at the tournament." 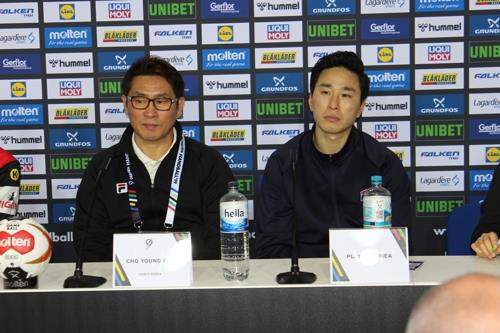