Samsung said it will host an Unpacked event at San Francisco's Bill Graham Civic Auditorium on Feb. 20, 2019, to showcase the new Galaxy model, with a separate event scheduled for London.

The gathering will bring together 3,000 journalists and officials from Samsung's global partners, it said.

Samsung's planned rollout of the new Galaxy model is about a week earlier than usual. The tech giant has usually released its new Galaxy smartphones at the Mobile World Congress in Barcelona in late February.

It will also be Samsung's first Unpacked gathering in San Francisco, close to the headquarters of archrival Apple Inc.

Samsung unveiled the Galaxy S3 in London and hosted Unpacked events for the Galaxy S4 and S8 in New York. 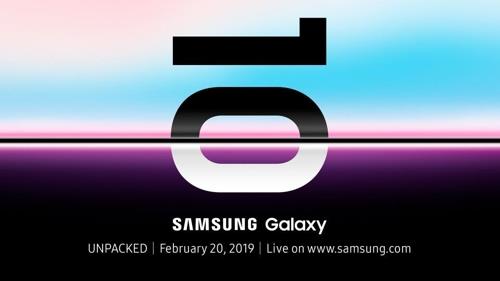 "2019 is a landmark year for Samsung as it marks the 10th anniversary of Galaxy phones," a Samsung official said. "San Francisco is the best place for an Unpacked event as the city is the hub of technological developments where Samsung's important partners are located."

A fifth-generation (5G) network-powered model may come out after March.

Samsung is reported to be kicking off global sales of the Galaxy S10 smartphone on March 8.

Market watchers said Samsung may launch its first foldable smartphone at the Mobile World Congress after drawing the attention of industry people with the rollout of the Galaxy S10.