According to data compiled by the Financial Supervisory Service (FSS), offshore traders sold a net 6.68 trillion won (US$5.98 billion) in 2018. It is the first time that they had been net sellers since 2015, when they offloaded a net 3.45 trillion won worth of local shares.

By country, British investors dumped the largest amount of Korean shares, at 8.8 trillion won, followed by 3.1 trillion won offloaded by traders from Saudi Arabia and 2.9 trillion won sold by the Netherlands, the FSS said.

On the other hand, the United States was the No. 1 buyer of Korean shares by snatching up 7.3 trillion won worth of shares, followed by Hong Kong with 1.02 trillion won and China with 883 billion won.

As of the end of December, the total value of offshore investors' shareholdings stood at 509.72 trillion won, accounting for 31.3 percent of the country's total market capitalization, the FSS said.

On the local bond market, however, foreigners scooped up a net 15.63 trillion won worth of bonds last year.

As of the end of last year, the combined value of their bond holdings came to 113.79 trillion won, accounting for 6.6 percent of the total value in the debt market, according to the FSS. 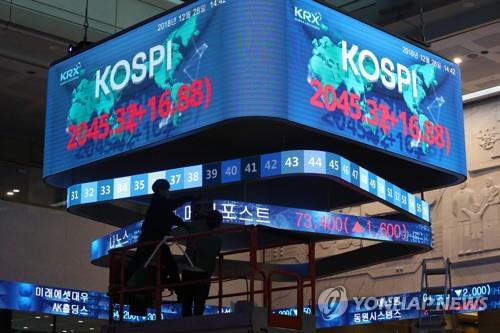 Foreigners turn to net sellers of Korean shares in 2018: data

Foreigners turn to net sellers of Korean shares in 2018: data