SEOUL, Jan. 12 (Yonhap) -- South Korean stocks are expected to move in a tight range next week on lingering uncertainties, such as the Brexit vote and the release of 2018 earnings results from major firms, analysts said Saturday.

The benchmark Korea Composite Stock Price Index (KOSPI) closed up 12.29 points, or 0.60 percent to 2,075.57 on Friday. This week, the main index gained 3.2 percent helped by optimism over U.S.-China trade talks.

While eyeing new developments in the trade negotiations between the world's top two economies, investors will also pay keen attention to how the Jan. 15 voting on Brexit will proceed to get a cue in reorganizing their investment portfolios, analysts said.

"As some local companies are expected to come up with lower-than-expected earnings results for the fourth quarter, the KOSPI is not likely to rise sharply next week," Km Byoung-yeon, an analyst at NH Investment & Securities Co., said.

Brokerages forecast the main index to move between 2,020 points and 2,100 points in the coming week due to lack of an upside momentum.

Major companies, such as Hyundai Motor Co., POSCO, LG Chem Ltd., Korean Air Lines Co., and AmorePacific Corp., are scheduled to release earnings results for the fourth quarter, as well as for the whole of 2018, from late this month.

On Tuesday, Samsung Electronics Co. came up with a disappointing figure of 10.8 trillion won (US$9.67 billion) in estimated operating profit for the fourth quarter that ended in December. It was a 29 percent plunge from a year earlier.

Its smaller local rival, LG Electronics Inc., announced an 80 percent on-year drop in fourth-quarter operating profit at 75.3 billion won. The two firms were hit by slowing sales of their handsets.

If the global economy and handset demand do not recover, the KOSPI will be weighed by movements in tech shares, Kim Yong-koo, an analyst at Hana Financial Investment Co., said. 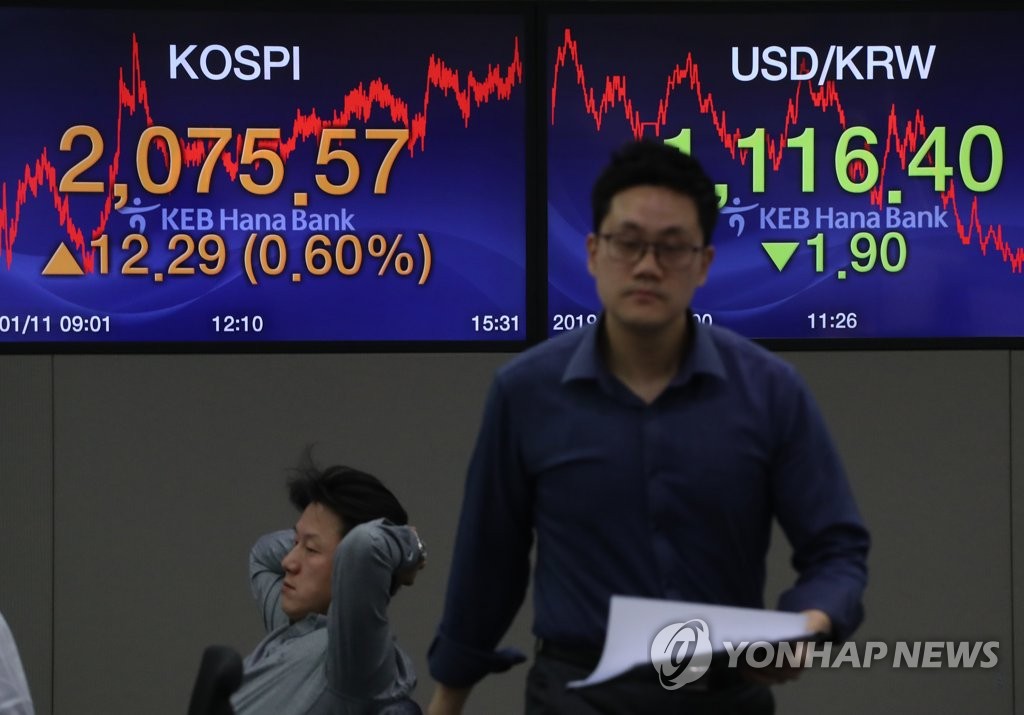