SEOUL, Jan. 11 (Yonhap) -- A disciplinary panel at the Supreme Prosecutors' Office on Friday decided to dismiss one of its investigators over alleged professional misconduct during his term at the presidential office Cheong Wa Dae.

Kim Tae-woo, the investigator at the Seoul Central District Prosecutors' Office, has claimed that the presidential office ordered him to carry out surveillance of civilians since he was forced to return to the original post last November over an allegation that he sought to influence a police probe into a corruption case involving his acquaintance. 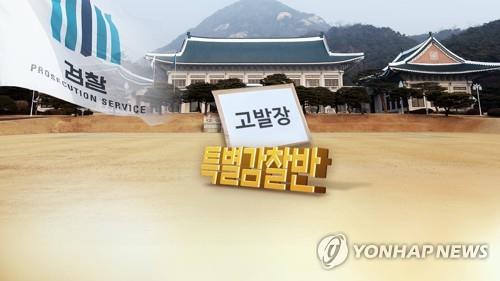 Kim is accused of leaking classified information local media outlets. He allegedly collected the information while working as a special inspector at Cheong Wa Dae between July 2017 and November last year.

Kim is also accused of having inappropriate encounters with a businessman and a senior executive at major mobile carrier KT Corp. in breach of the anti-graft law.

Kim has insisted that he was wrongfully removed from his Cheong Wa Dae post because he kept tabs on those who have close ties to President Moon Jae-in, including the sitting ambassador to Russia.

Last last month, Cho flatly rejected Kim's claim, telling lawmakers that, "The bottom line is that as Kim has become almost certain to face disciplinary actions due to his irregularities, he crafted a rare hoax by distorting the due work process into a political issue and trying to cover up his misconduct."
(END)