Defensive back Kim Min-jae scored his first international goal in the first half in Group C action at Hazza Bin Zayed Stadium in Al Ain, the United Arab Emirates, as South Korea secured a spot in the round of 16 with their second straight win.

South Korea hit the crossbar three times in the second half as they eked out the narrow win over the heavy underdogs.

At the previous Asian Cup in 2015, South Korea also opened the group stage with back-to-back 1-0 victories, en route to a runner-up finish behind Australia. 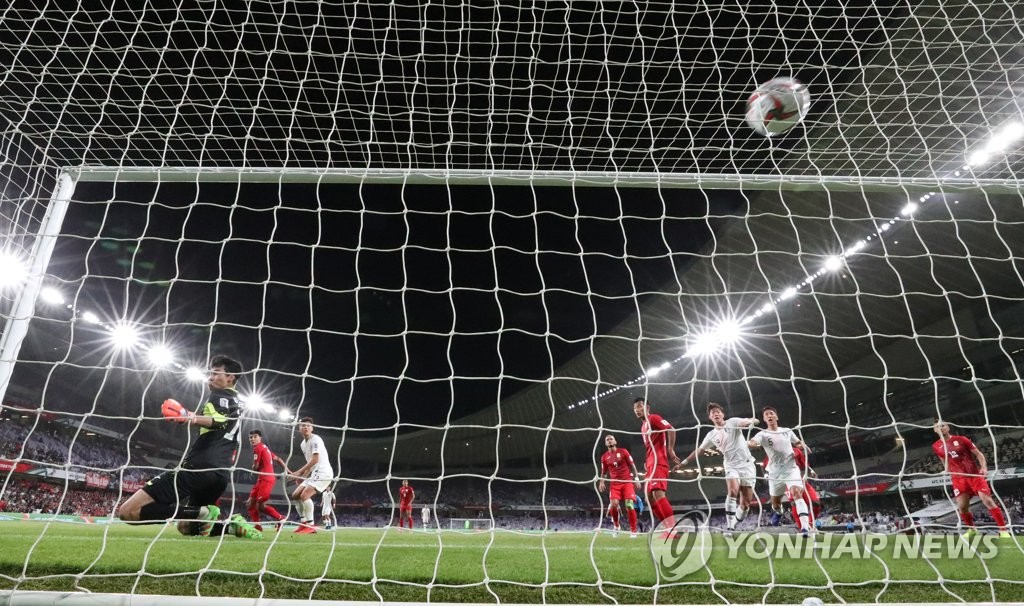 South Korea, chasing their first Asian Cup title since 1960, opened the group play by defeating the Philippines 1-0 on Monday. The final Group C match will be next Wednesday against China in Abu Dhabi.

China beat the Philippines 3-0 earlier Friday in Abu Dhabi to punch their ticket to the round of 16 first.

There are six groups of four, and the top two countries from each group, plus the four-best third-place teams, will reach the round of 16.

China and South Korea both have six points but China are at the top of the group thanks to their superior goal difference, plus-4 to plus-2.

South Korea, ranked 53rd in the world, opened the scoring against the 91st-ranked opponents in the 41st minute, when Kim headed home a corner from Hong Chul.

South Korea won the corner after Koo Ja-cheol's shot from the center of the box was tipped out by goalkeeper Kutman Kadyrbekov.

Hong, who replaced Kim Jin-su at left back from Monday's starting lineup, sent a cross toward the box, and Kim deftly redirected it past Kadyrbekov. 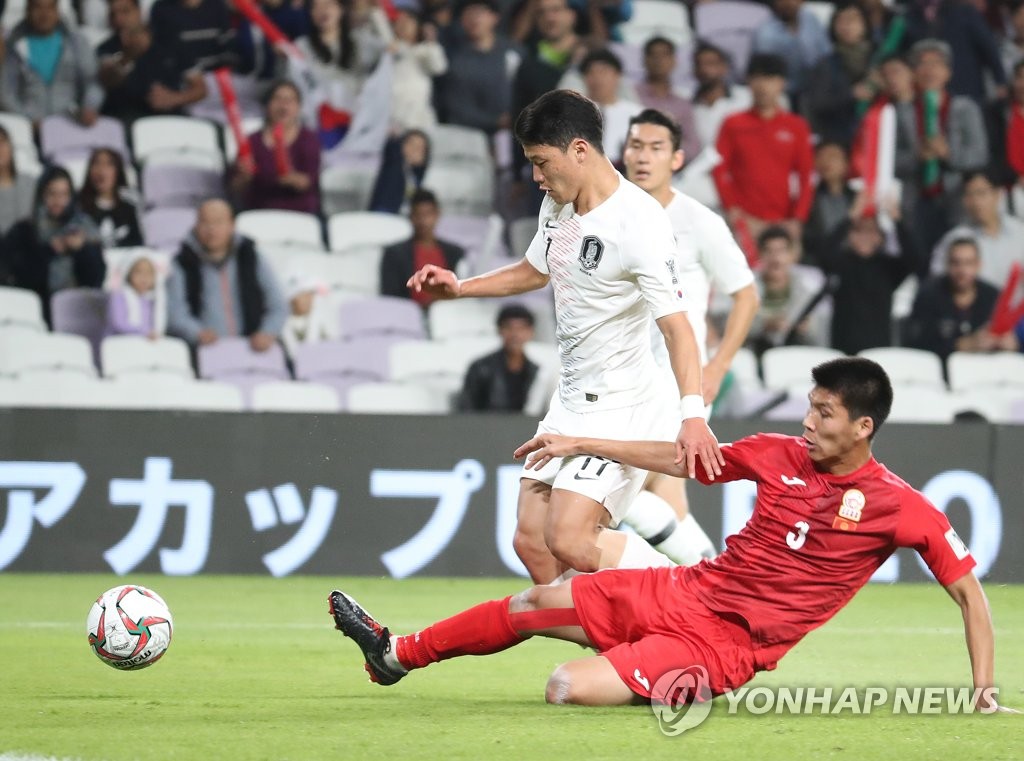 Koo tested Kadyrbekov first with a long-distance attempt in the 12th minute. Six minutes later, Hwang Ui-jo's attempt was blocked by a defender, and Hwang In-beom pounced on the loose ball and sent it just past the left post.

Hwang Ui-jo, who scored South Korea's lone goal against the Philippines, had the far side of the net open, but couldn't quite curl it home from the left side of the box in the 20th minute.

South Korea dodged a bullet in the 34th minute, as Kyrgyzstan nearly broke the scoreless deadlock. In a chaotic scramble that ensued following a corner kick, Bekzhan Sagynbaek tried to poke one past Kim Seung-gyu but ended up shooting it right at the South Korean goalkeeper.

South Korea missed an even better opportunity two minutes later. A great feed by Koo deep in the box found Lee Chung-yong left all alone in the goalmouth, but the midfielder airmailed the shot well over the bar.

Following Kim's goal, Koo continued to be the offensive engine. He set up an open chance for Hong on the left side of the box, though the left back was denied on the short side by Kadyrbekov.

Koo tried to get on the board himself in the 53rd minute, when his low shot missed the far corner from the left edge of the box.

After Koo was substituted out in the 63rd, Hwang Ui-jo took more of the charge on offense.

In the 67th, Jung Woo-young's through ball sprang Hwang free up the middle, but the forward was soon challenged by multiple defenders and never got a shot off.

In the next minute, Hwang's header off a Hong feed went off the bottom of the crossbar and hit the goal line before bouncing out of play. 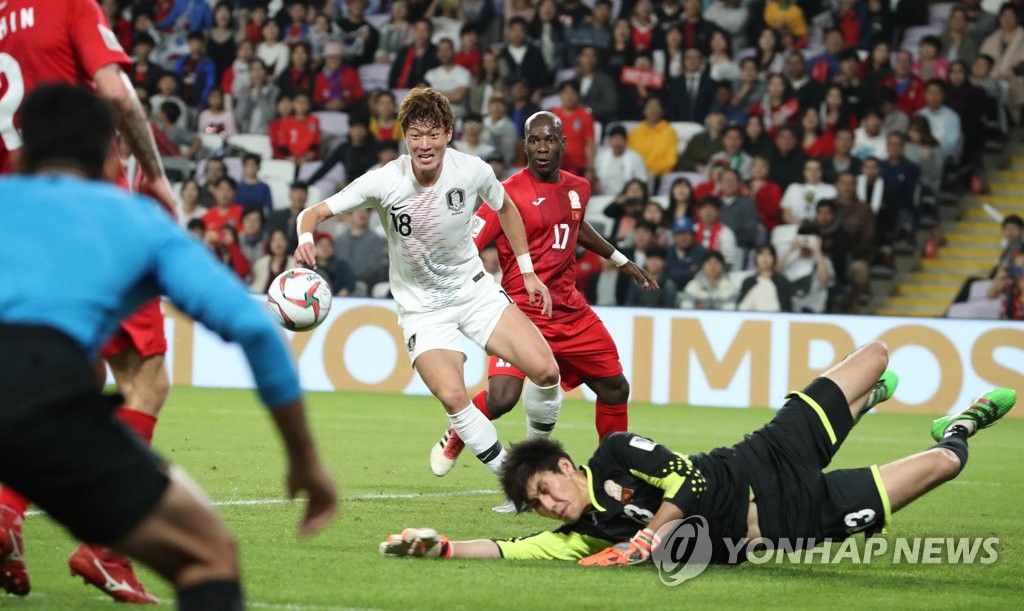 Hwang hit the crossbar again in the 73rd minute from close range, after taking a cross from Lee Chung-yong.

Attacking winger Hwang Hee-chan rattled one off the bar himself in the 76th, after Kadyrbekov's save on Lee Yong's attempt landed right at Hwang's foot with the net wide open.

Hwang Hee-chan was on the prowl again in the 84th and forced Kadyrbekov to make a difficult save, but that was as close as South Korea got to picking up another goal.

Rather than sitting back on defense and waiting for counterattack opportunities, Kyrgyzstan tried to go toe-to-toe against South Korea and put some early pressure on the flustered opposing defense.

Kyrgyzstan took 12 shots to South Korea's 19, though only two were on target. South Korea had seven shots on net.

South Korea made some sloppy passes in the lethargic offensive showing against the Philippines on Monday, and they were statistically worse in Friday's win.

South Korea posted passing accuracy of 87.6 percent, down from 90 percent on Monday. And in the opponents' half, the rate dropped to 76.6 percent, compared to 86.4 percent in the previous match.

The Taeguk Warriors made good on 24 percent of their crosses, compared to 30.8 percent success rate against the Philippines.

South Korea were missing two starting midfielders from Monday's match. Ki Sung-yueng, a veteran field general, was replaced during the second half on Monday with a hamstring injury and he's been ruled out for one week. And wing midfielder Lee Jae-sung suffered a sprained right big toe during that same match and his status for the next group match remains up in the air.

On a down note from Friday's win, starting right back Lee Yong picked up his second yellow card in as many matches and will be ineligible against China next Wednesday.