The Coast Guard received a report around 8:28 a.m. from a ship passing the area that the 9.77-ton boat was belching black smoke in waters 81.5 kilometers from Pohang.

The affected ship set sail Friday evening to catch snow crab before catching fire in the early hours of Saturday. The six crewmen aboard the boat tried to extinguish the fire, but jumped into the sea as the flames spread further, according to the Coast Guard.

Three of them got back to the boat as the fire subsided, but the other three went missing.

Crewmen from a passing ship rescued the three aboard the wreck, including the captain, surnamed Kim, before the Coast Guard arrived at the scene and found two of the three crewmen who had gone missing.

The two were found unconscious and later declared dead after being brought out of the sea, the Coast Guard said.

Rescuers have deployed 21 ships, seven airplanes and five other civilian fishing vessels to search for the remaining person.

In the ensuing investigation, the captain said, "The fire started in the switchboard of the boat's engine room," according to the Coast Guard. The Coast Guard will conduct a further investigation to find the exact cause of the incident once the surviving crewmen have been treated, it said. 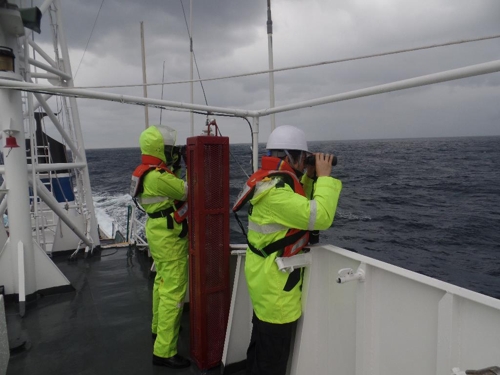