SEOUL, Jan. 13 (Yonhap) -- Whisky sales in South Korea fell for the 10th year in a row in 2018, industry data showed Sunday, amid changes in the country's wining and dining culture, and a shorter workweek.

Total sales of the distilled alcoholic beverage reached over 1.49 million boxes, down 6.2 percent from a year earlier, the latest annual figures showed. A box is calculated as 18 bottles containing 500 milliliters of whisky.

This is roughly half of the 2.84 million boxes shipped in 2008, when sales peaked. 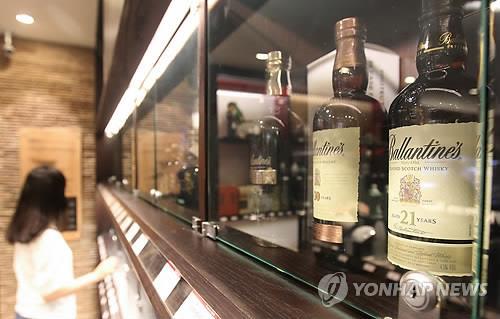 Market watchers said sales that took a hit after the 2008 global financial crisis have yet to recover, while the introduction of the Kim Young-ran anti-graft law that clamped down on hospitalities exchanged by those in certain occupations requiring higher ethical standards, poured cold water on demand.

"Whiskys were sold mostly at expensive bars and drinking establishments, and were widely viewed as being used as part of business-related meals and entertainment, so it was usually not consumed by individuals," a local liquor retailer said.

He added that with the start of the 52-hour workweek last year, and people cutting back on eating and drinking after work hours with colleagues from work, whisky demand has taken a further blow.

Others in the industry dominated by Diageo Korea Co., Golden Blue Co., Pernod Ricard Korea and Lotte Chilsung Beverage Co. said a rise in demand for imported bear and general diversification of the local alcoholic beverage market that has led to the consumption of more wine and "makgeolli," a traditional grain-based drink. These developments have all hurt the whisky market here.

"To overcome such challenges there have been moves by companies like Golden Blue to release drinks with lower alcoholic content, along with efforts to sell premium products, but this has not been able to halt the decline," another source pointed out.

He stressed that liquor companies need to come up with a strategy to appeal more directly to everyday consumers like diversifying into single malt or packaging whisky with cocktails that are gaining popularity.
(END)