Lee played in Valencia CF's 1-1 draw with Real Valladolid as a second half substitute in their Spanish La Liga match at Mestalla Stadium in Valencia on Saturday (local time). He replaced Denis Cheryshev in the 87th minute.

Lee is now the youngest foreign player in the club's 100-year history at 17 years, 327 days. He broke the record that was previously held by Momo Sissoko, who was 18 years old when he made his first league outing in 2003.

Lee already made a first when he made Valencia first-team list in October 2018 at the Spanish King's Cup (Copa del Rey). With that appearance, Lee became the youngest South Korean to debut in European football over Nam Tae-hee, who was 18 years and 36 days old when he first appeared for Valenciennes FC in the French Ligue 1 in 2009. 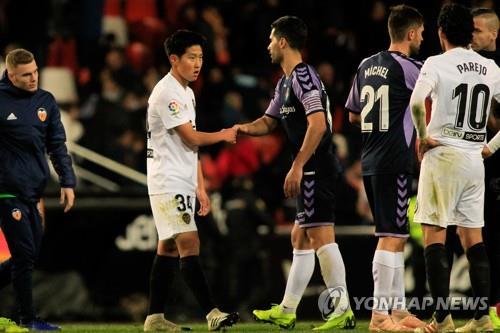 "I'm proud to make my (league) debut here at Mestalla Stadium in front of all the fans who supported us throughout the game," Lee said through his club after the match. "All the matches that I've played with the team are special, and I gave my everything when I got the chance."

Lee said he saw that some fans from his homeland were at the stadium when his coaches told him.

"I want to thank them because they came all the way from South Korea to see me," he said. "I tried to give my best out there so that fans could enjoy themselves."

The skillful midfielder's next goal will be scoring a goal in La Liga and becoming the youngest South Korean to do so in Europe's top five leagues that include England, Germany, Italy and France.

Son Heung-min, currently with English side Tottenham Hotspur, has that record at 18 years, 114 days. The forward scored his German Bundesliga debut goal in 2010, when he was with Hamburger SV.

Lee gained attention while appearing on a South Korean reality TV program for football prodigies in 2007 and signed with Valencia's youth team four years later. He has four goals in seven caps with the South Korean under-20 national team. 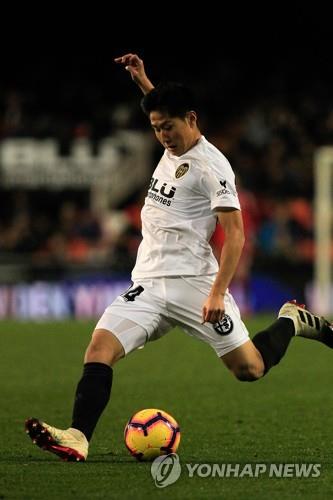