The country's employment rate -- the portion of hired people to the working-age population -- reached 60.7 percent in 2018, down 0.1 percentage point from a year earlier, according to Statistics Korea.

It was the first time that the annual employment-to-working population rate lost ground since 2009, when the number fell 1 percentage point in the aftermath of the global financial crisis.

By age group, those in their forties saw their employment rate drop 0.4 percentage point to 79 percent last year from a year ago, marking the steepest on-year decline in nine years.

Also, the employment-population rate of workers in their fifties also fell 0.7 percentage point on-year to 75.2 percent.

Experts said the on-going corporate restructuring in the labor-intensive manufacturing and construction sectors affected the sharp decline in the employment rate of middle-age workers in South Korea.

On the other hand, the employment-population rate of those in their late twenties and seniors over 60 years old marked a record high in 2018.

The statistics data showed that 70.2 percent of those aged between 25 and 29 were hired last year, surpassing the 70 percent line for the first time since the country compiled comparable data in 1980.

At the same time, the corresponding numbers for people 65 years old or over rose 0.7 percentage point on-year to a record 31.3 percent in 2018.

"Baby boomers are continuing their economic activities even after their retirement," said a recent report by the government-funded Korea Labor Institute. 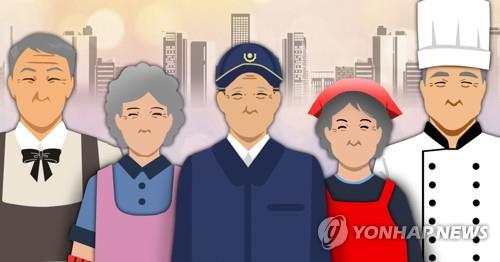