SEOUL, Jan. 13 (Yonhap) -- South Koreans put in an average of 1.3 fewer hours at their jobs in 2018, but the country still had one of the longest workweeks among Organization for Economic Cooperation and Development (OECD) members, official data showed Sunday.

According to the Statistics Korea, South Korean employees worked 41.5 hours last year, with overtime work falling below two hours for the first time ever.

The development comes as Asia's fourth-largest economy implemented a maximum 52-hour workweek rule amid efforts to stimulate consumption to generate more growth. The limit went into effect in July for companies with more than 300 employees and will be gradually expanded to cover smaller firms. 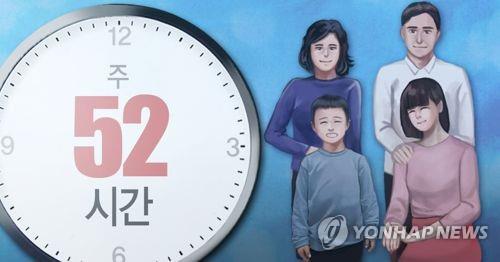 The country's average workweek, which fell under 50 hours for the first time in 2002, has been declining gradually over the years, with last year's fall being the sharpest in five years after the 1.5-hour annual drop reported for 2013.

The statistical agency said among the 26.82 million people employed in the country last year, those that put in more than 53 hours per week stood at just 16.8 percent of the total, down 3.1 percentage points compared with the year before.

The latest findings, however, showed that while there has been a noticeable drop in the workweek, South Koreans still put in a lot of hours at the office and factories when compared with other OECD member states.

The agency said that an average worker here spent 1,963 hours at his or her job in 2018, but this will place it third after Mexico and Greece in terms of annual work hours. The average Mexican worked 2,257 hours and those in Greece 2,018 hours. The figures for the two countries were from 2017 data.

"Despite some criticism, South Koreans on the whole are still working long hours," a market watcher said. He pointed out that while there are calls by companies to adopt flexible working hours, most understand that people here still work more than those living in other developed market economies with high income.

Under the government's implementation plan, the 52-hour workweek will be expanded to businesses hiring between 50 to 300 people in January 2020, and include firms with more than five people in July 2021.

If the timetable is maintained, the average workweek for an ordinary person will drop even further in the next few years.

Related to the trend, the Korea Labour and Society Institute said limiting how long a worker should stay on the job is critical for the health and well-being of individuals, and there is a consensus that the policy needs to be implemented fully.

Korea Labor Institute, echoed the view that the 52-hour system is a move in the right direction but stressed the need to come up with ways to enhance labor productivity going forward.
(END)