SEOUL, Jan. 13 (Yonhap) -- More than 100 quakes were detected on the Korean Peninsula and its surrounding waters in 2018, the third most for a year, the state weather agency said Sunday.

The outbreaks of seismic activities totaled 115 in 2018, according to the data by the Korea Meteorological Administration (KMA). It is the third highest number of occurrences since the government began to track related data in 1978.

On Sept. 12, 2016, the 5.8 magnitude earthquake struck the southeastern province of Gyeongju, the strongest by record. On Nov. 15, 2017, the second-strongest 5.4 magnitude quake hit the nearby port city of Pohang.

The weather agency largely cited the Pohang earthquake as the primary reason for last year's frequent outbreaks, defining them as aftershocks.

The weather agency said it is not ruling out the possibility of another major quake this year, adding that it is keeping close tabs on seismic movements so as to promptly notify the public in case of an outbreak. 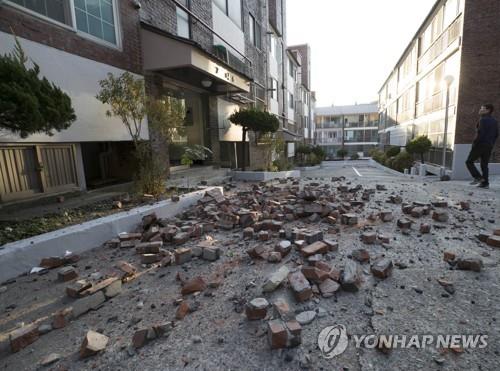